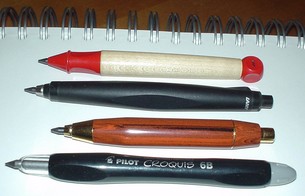 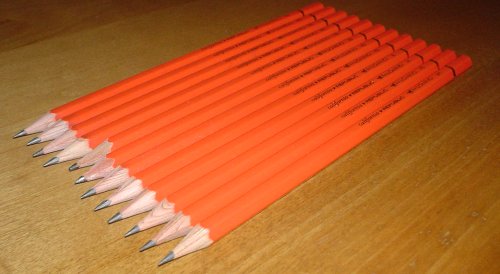 Pictured above are two pencil extenders (and a new pencil for comparison). They are devices that give a second career to pencils that might otherwise be approaching retirement. Pencils can last quite a while, so the ones that have been used until they turn into stubs are probably the really good ones – the ones we most often choose for our writing or drawing tasks. These extenders can allow a pencil to be used even when many sharpenings have made that pencil no longer comfortable or practical to be held in one’s hand.

Above are a No. 1098 N Koh-I-Noor, and a Cretacolor extender, with a new Cretacolor pencil for comparison.

I found them both at art stores. They are quite comfortable and simple to use. The pencil stub is placed in the opening, and a clamping ring moved to secure the pencil. With certain pencils being hard to replace or expensive (e.g. artist’s pencil crayons), one or two of these extenders could certainly be a good investment.

The Blackfeet Indian Pencil is a unique creation. It is a quality pencil that has a varnished natural wood encasing that was years ahead of others in recognizing that the natural beauty of wood grain could be embraced by the public, if presented properly. The varnish is thick and polished – it doesn’t look like (and isn’t) something one would find at a generic office supply store.

The original had black imprinting with a small horse and rider logo, and the words “THE BLACKFEET INDIAN PENCIL” and the digit 2 for the lead hardness. There is a silver ferrule and light pink eraser. It writes nicely and the lead doesn’t crumble or splinter. A later version had a black ferrule and dark pink eraser. Unfortunately, this later version doesn’t maintain the quality of the classic version – the varnish is thinner, making the pencil less pleasant to hold, and the black ferrule doesn’t match the pencil as well, and can distract the eye.

The pencils were made in Browning, Montana by the Blackfeet Indian Writing Company as part of a tribal owned economic initiative. I gather up to a hundred people may have been employed at the company’s peak, but it sadly appears to have been dormant the last few years.