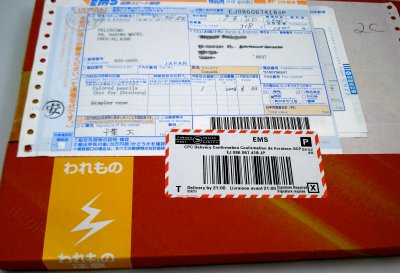 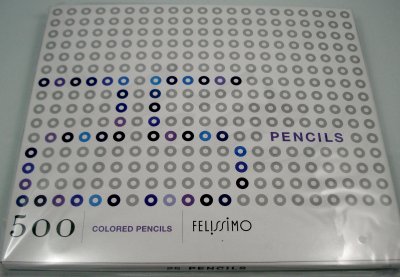 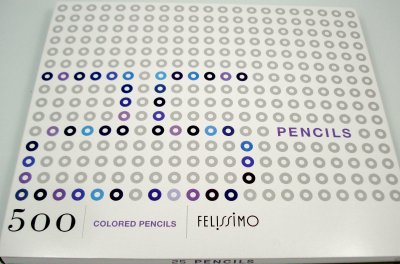 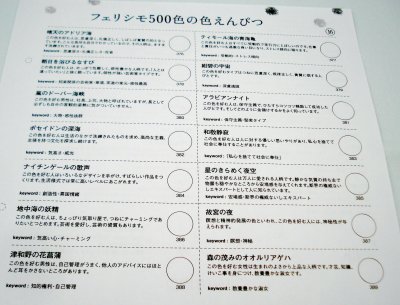 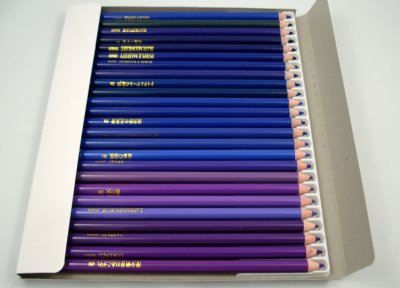 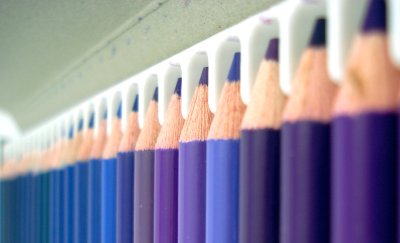 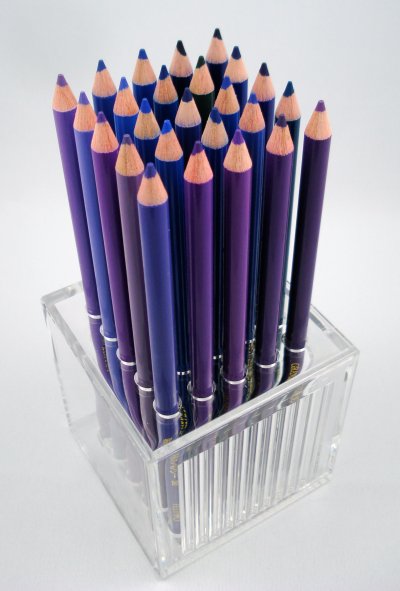 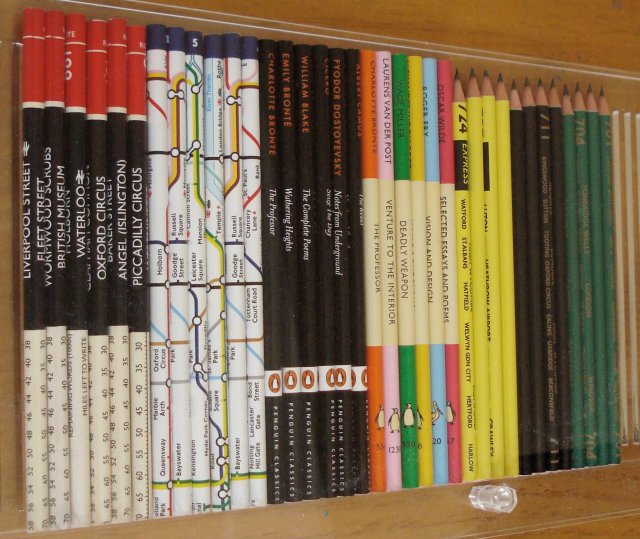 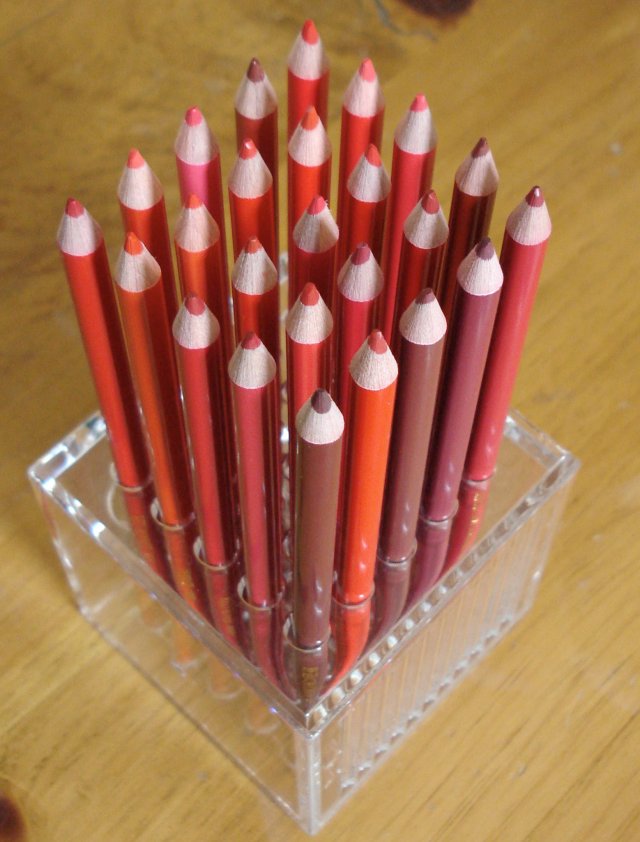 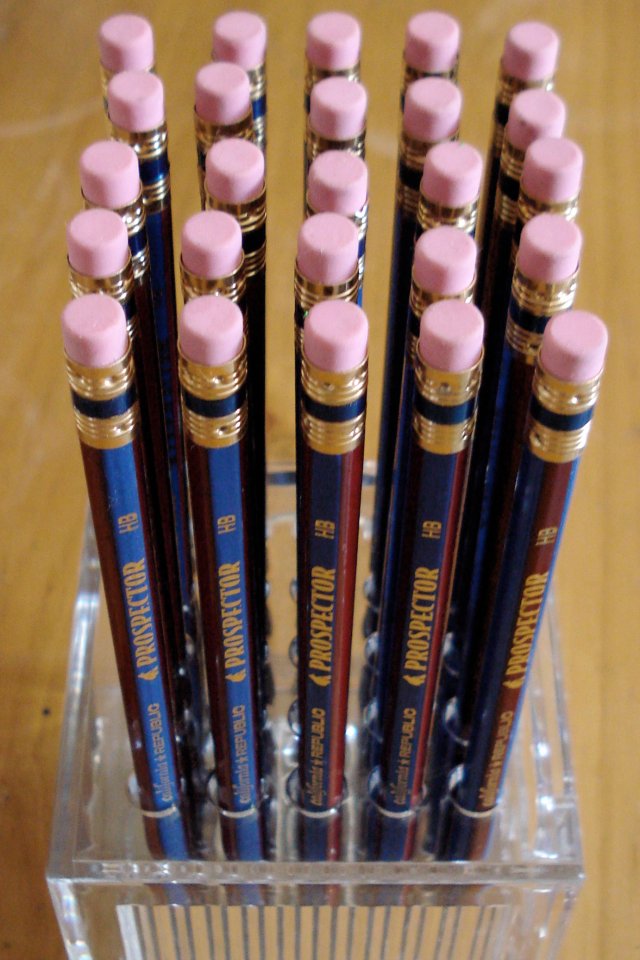 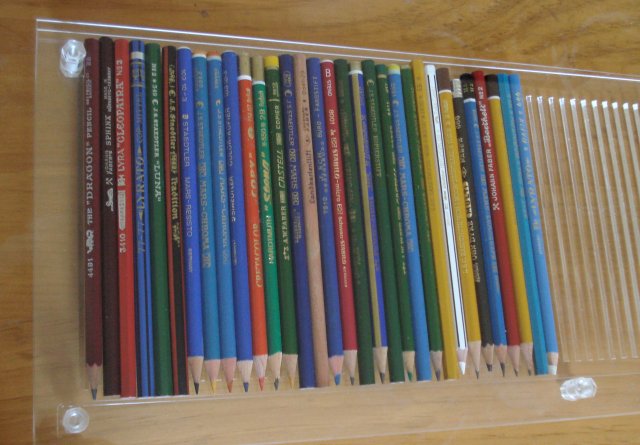 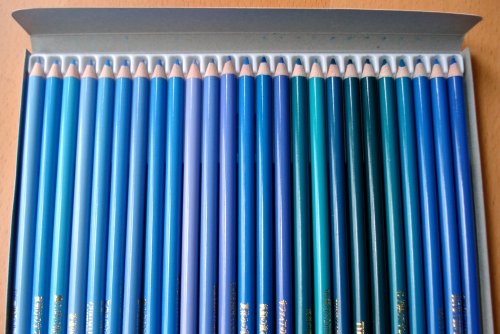 Blue is the theme of Felissimo’s fourth set of colour pencils.

I’m a bit behind in displaying these – I’ve already received the fifth set, and a Canada Post notice tells me I wasn’t in when they attempted delivery of the sixth set. Wow, 150 colour pencils here or nearby! The collection is starting to take shape. 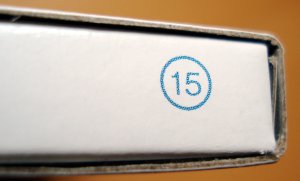 I’ve noticed that pencil blogs in Japan mention these pencils with different reference numbers. I’m afraid I only just figured this out – the boxes have a small circled identifier. I’ve been referring to the pencils as I’ve received them (calling this the “4th set”, for example), but depending on where you live and when you ordered them, you might receive them in a different order. For the record, this is volume 15.

Quite a bit of feedback has been sent this way about the pencils. I’ll try to summarize.

I’ll offer some feedback on these points:

1. I am very happy to see mentions of these pencils in mainstream North American media, especially television and magazines. Felissimo has clearly made an impact in the public arena, a place other pencil manufacturers seem to have forsaken.

2. A subscription may provide ongoing revenue, but it should be an option rather than the only purchase method.

3. Artists – the message is clear, but as I’ve written before, high quality pencils that offer open stock, accompanied by laboratory tested lightfastness reports, are in a completely different price range. If Caran d’Ache offered a 500 pencil set, it might cost thousands. But it would be amazing!

4. Cost. The Japan Post EMS (“registered air mail”) delivery multiplied by 20 is no doubt a large (majority?) part of the cost. 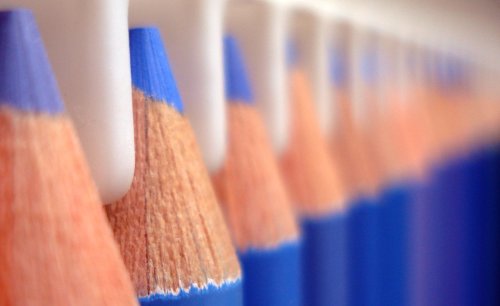 Perhaps five shipments of 100 pencils, or just sending the 500 pencils together, might be a better offer. If you could buy the 500 pencils in a single package for $250, would you be tempted?

The offer may soon end. Though all orders will of course be completely fulfilled, the acceptance of new subscriptions may soon be closing. 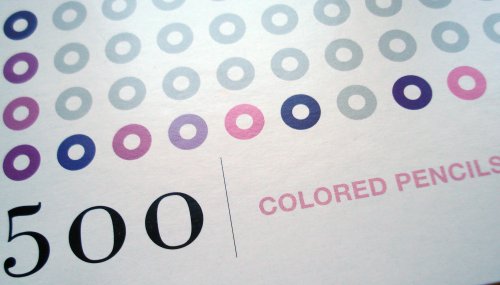 Felissimo’s 3rd pencil set is out, and again has a specific focus. I think it may be the nicest set yet! Twenty-five shades of purple beckoning! 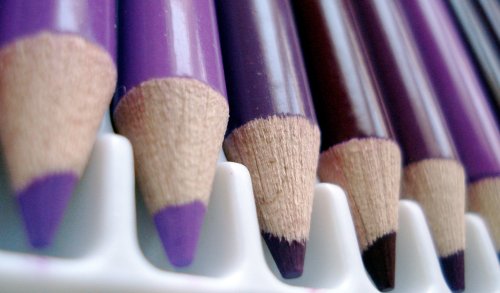 Congratulations to Felissimo for recent mentions on the December 8th Martha Stewart Show, in the New York Times Gift Guide, and many other locations.

Finally, a company working and succeeding at promoting woodcase pencils in the modern world! This leadership is a reason why pencil talk is proud to be participating in Felissimo’s 500 pencil set promotion.

So now that 75 (and soon, 100) pencils have been released, what happens if you subscribe to the series? Do you get just 425 (or 400) pencils? The answer is no – you will still get all 500 over twenty months, though I’m not sure if the delivery sequence will be the same as you are seeing here. 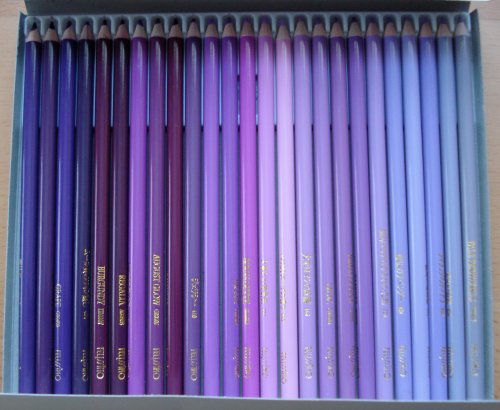 Here is the second set of pencils from Felissimo’s series of 500 colors.

Again, the packaging is impressive: 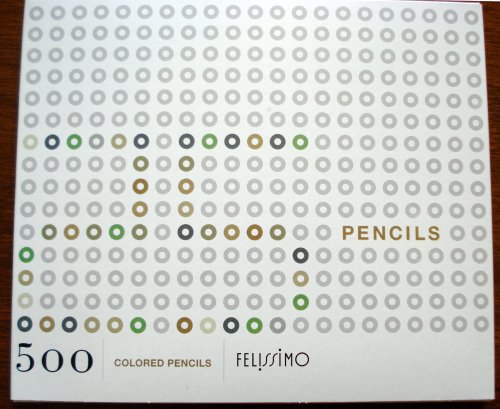 This month’s palette is hard to describe in a single word – the focus is on muted pinks, creams, pea greens, and mint greens. I was somehow expecting something like last month’s bright reds – perhaps another set of bright primaries, but also welcome this surprise. 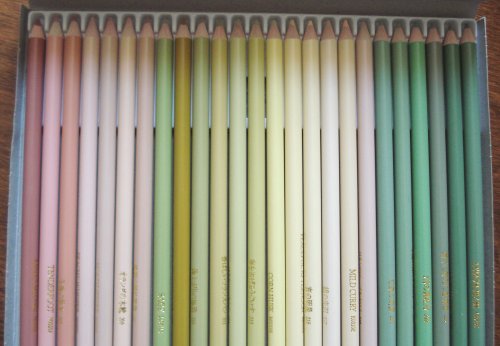 I did try them out, and realized that the pencil pigments are much subtler than the lacquers on the pencil surfaces – matching 500 sets of pigments with 500 surface lacquers must be a significant part of the manufacturing challenge.

That ninth pencil, called Mrs. Parson, stands out in both surface lacquer and on paper. 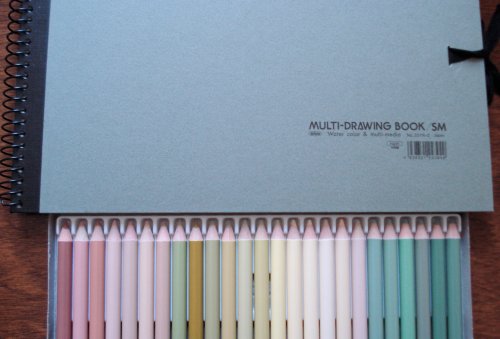 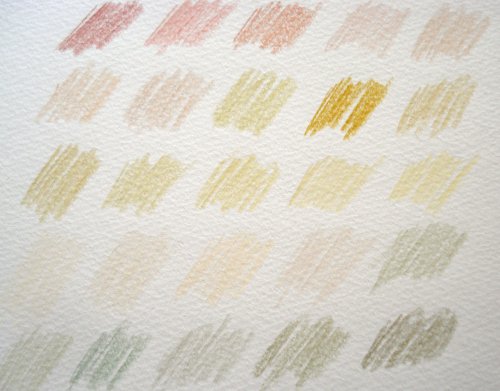 There were a few questions after last month’s post on the first set, and I recommend that those interested take a look at Felissimo’s “Frequently Asked Questions” page via the banner below. For example, on the issue of lightfastness, Felissimo state that a small sample of pencils have been tested, and all are 4/5 or 5/5 on the JIS lightfastness scale. JIS is the Japanese Industrial Standards section of the Japanese Standards Association. While probably insufficient data for professional artists, I think this speaks well about the pencils from the quality persective.

I can’t wait to see what the next 25 pencils look like! 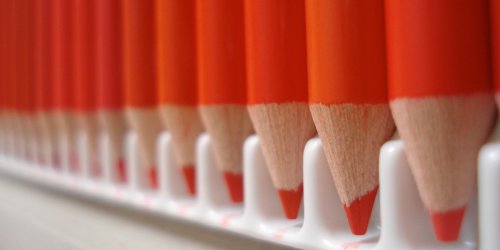 As befits such a set, the packaging itself is attractive and noteworthy:

The theme is red. Twenty-five shades of red! 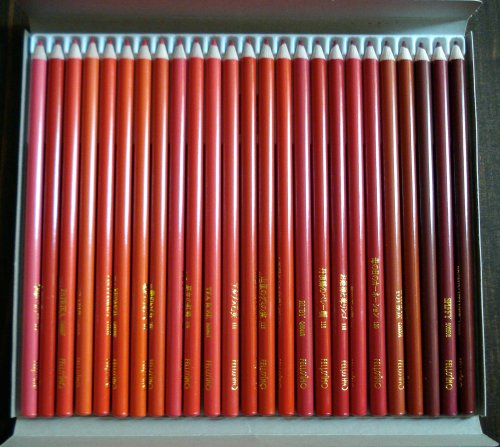 The only printed material was an index sheet in Japanese:

The colourful lineup does not disappoint.

The pencils have some very imaginative names.

I’m not sure how well the translation holds up.

On a Holbein 33YK-2 Multi-Drawing sketch book, the spectrum amazes: 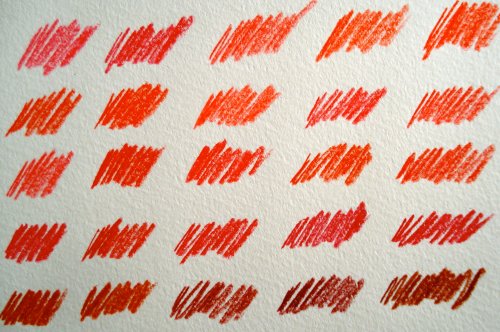 The series sells worldwide for $US33 per 25 pencils, including delivery via Japan Post EMS, which is an air mail signature-required service. If you even occasionally order pencils online, you’ll know that this is a great price.