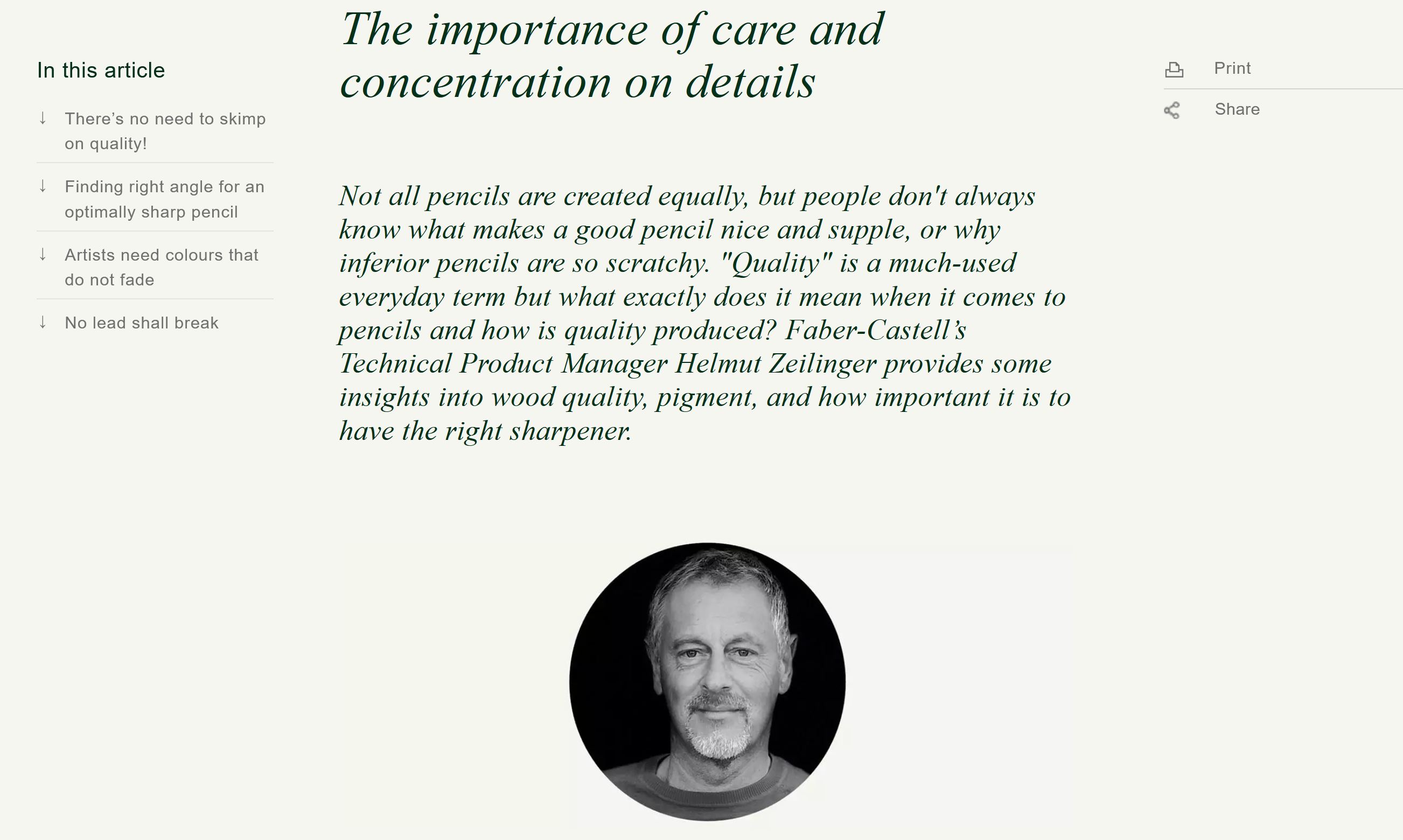 It is rare for anyone other that the CEO of a pencil company to address the public regarding pencils. It is particularly unusual to hear from the knowledgeable craftspeople and engineers who produce pencils at large scale.

Henry Petroski let the world know about the centuries of engineering that form the basis of pencil making, and Faber-Castell has very kindly featured an interview with their technical product manager Helmut Zeilinger in the latest online Faber-Castell magazine.

Sharpening problems result from mismatched halves of the pencil.

How would one resolve this issue? “For the wood alone, our specifications at Faber-Castell are almost as detailed as for individual parts in car production,” says Mr. Zeilinger. Unfortunately the subject of which wood species are ideal isn’t explored (but another article on Faber-Castell’s plantation likely provides the clues).

How often should a sharpener’s blade be replaced? Apparently after fully sharpening 12 pencils. Umm, has anyone ever seen a replacement Faber-Castell blade?

There is much more in the information rich article. I’ve like to thank Faber-Castell for this excellent article and Mr. Zeilinger for sharing his considerable knowledge! 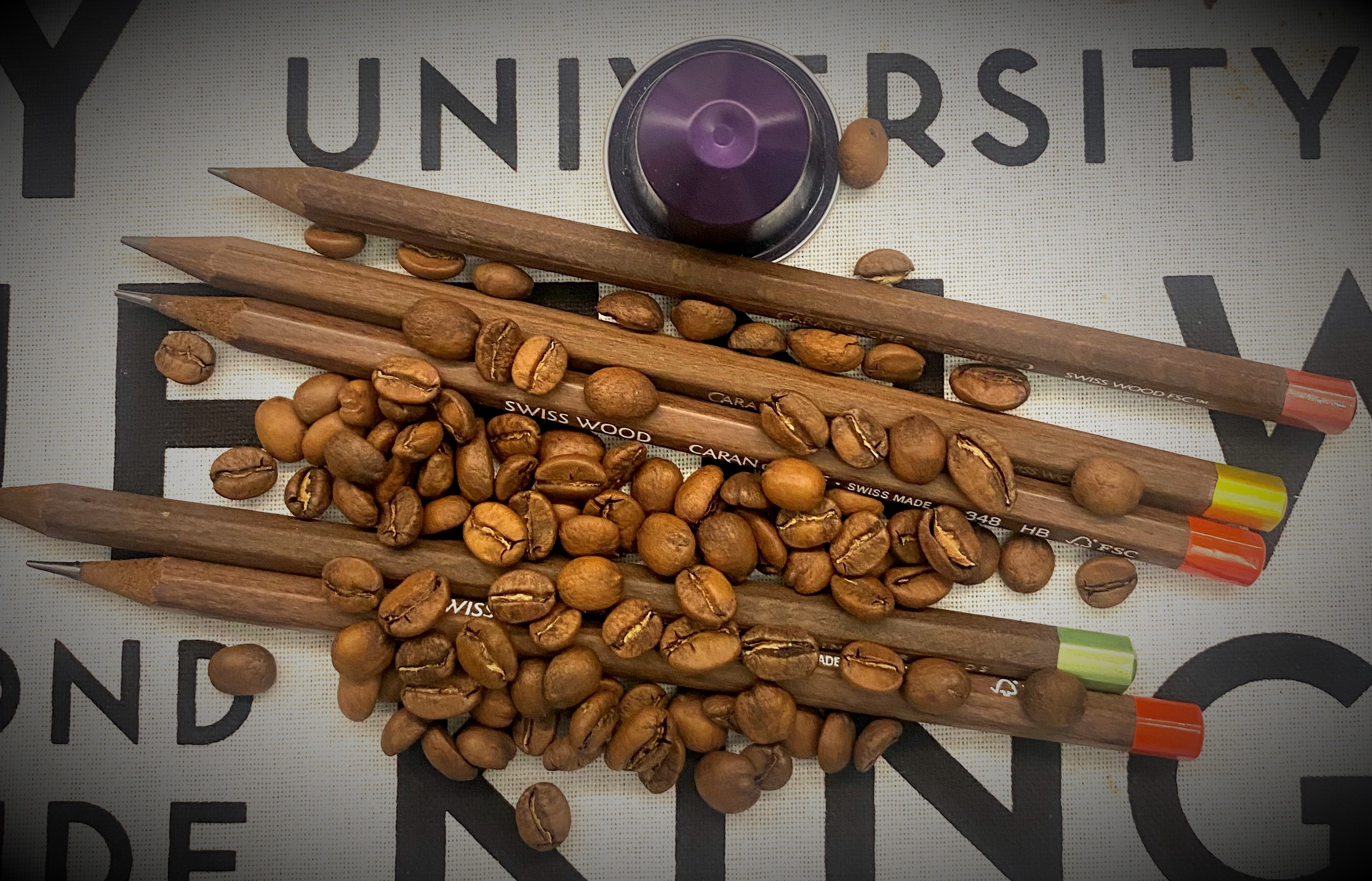 I like coffee. Most mornings I use a Bodum siphon maker or an AeroPress to create a little joy. I used to love the KitchenAid siphon maker, but it gave up the ghost and seems to be a retired model. For another type of drama, I used to own a Wilfa Precision. Although you can figure out the water flow, it persists in seeming like magic. I’ve elected to not explore stovetop or open flame approaches. I even enjoy instant coffee, which seems to have undergone slow gradual improvement over the years. I haven’t tried the new “high end” expensive instant coffees.

In 2016, I regularly stayed in hotels, almost all of which were furnished with pod or capsule coffee makers. There are many types of these – they come from Illy, Keurig, Nespresso, and others, and each manufacturer has multiple models. It took me a while to get the hang of them – I’d usually destroy the first capsule. There is a very explicit order of operations with these machines (which may seem obvious once you know it, but I didn’t) – add water to a vessel, turn on the machine, open a slot for the capsule, place the capsule, close the slot, push a button or buttons.

Let’s note something – the K-Cup inventor regrets his invention! I see the use case in a hotel room, but overall, these pods are “awful for the environment” (New York Times, 2021). Here is my hometown’s reasoning about why they don’t recycle the multiple pod formats (City of Toronto, 2018).

On the pencil front, Caran d’Ache just released a similar leadholder with the lead being 25% coffee grounds! Even further, they have released a version of their famous Grovelier beech Swiss Woods pencil with the 25% coffee lead!

As Caran d’Ache say, “This edition no.4 will enable people who bought the previous editions to expand their Caran d’Ache + Nespresso collection”. Good grief, that’s quite cynical. What I really don’t like is the feeling that I just bought the world’s most expensive advertising pencil. It has a lot of Nespresso branding, but it’s sold at retail as a regular writing implement. You may want to take a look at this post at Bleistift, which notes that there are multiple Nespresso collaboration products.

About the pencil – it is sold in a set of three. The cardboard packaging has three dimensional pencils and coffee beans! The pencils have striking end caps, which are painted but meant to convey the Nespresso capsule colours. 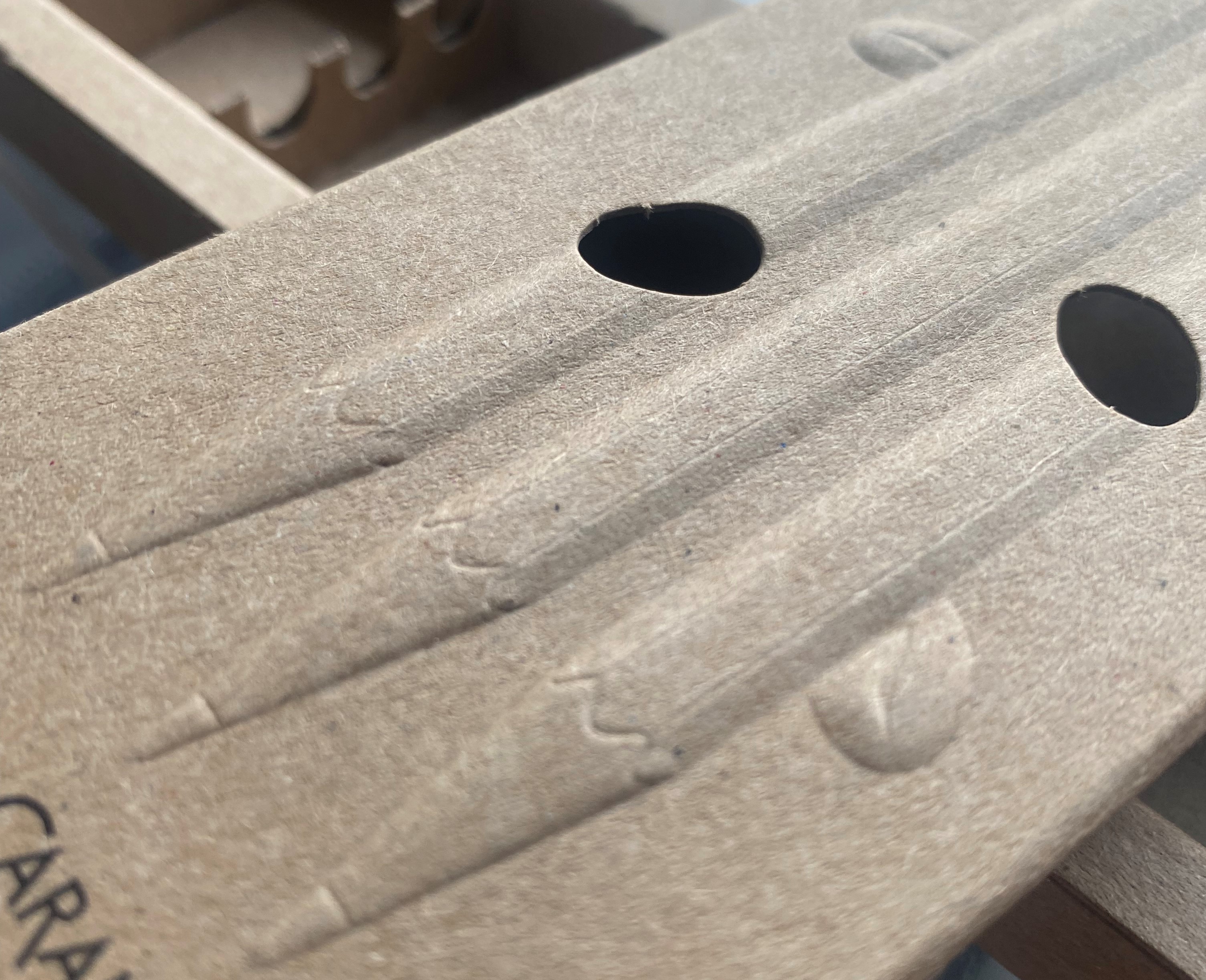 The imprint is a bit different than the standard 348 pencil, reading:

The lead, said to contain 25% recycled coffee grounds, is of course a curiosity. Coffee is known to make a natural stain, but can it survive the modern lead making process?

The lead seems smooth, maybe just a bit fainter than the 348, but does slightly crumble.

As well as being a super exotic pencil – locally made and manufactured in Switzerland from Swiss beech wood and using a lead partly made of coffee – something else stood out for me. The pencil is extremely aromatic, and not in a good way, at least for me. I’ve read that the 348 is aromatic, but I found the samples I’ve used only slightly so. This Nespresso pencil, between the beech wood and the lead (we can observe the lead independently via the Nespresso Fixpencil; it is highly aromatic), is too fragranced for me to use. I actually wondered if Caran d’Ache got an assist from their friends at Misenzir. 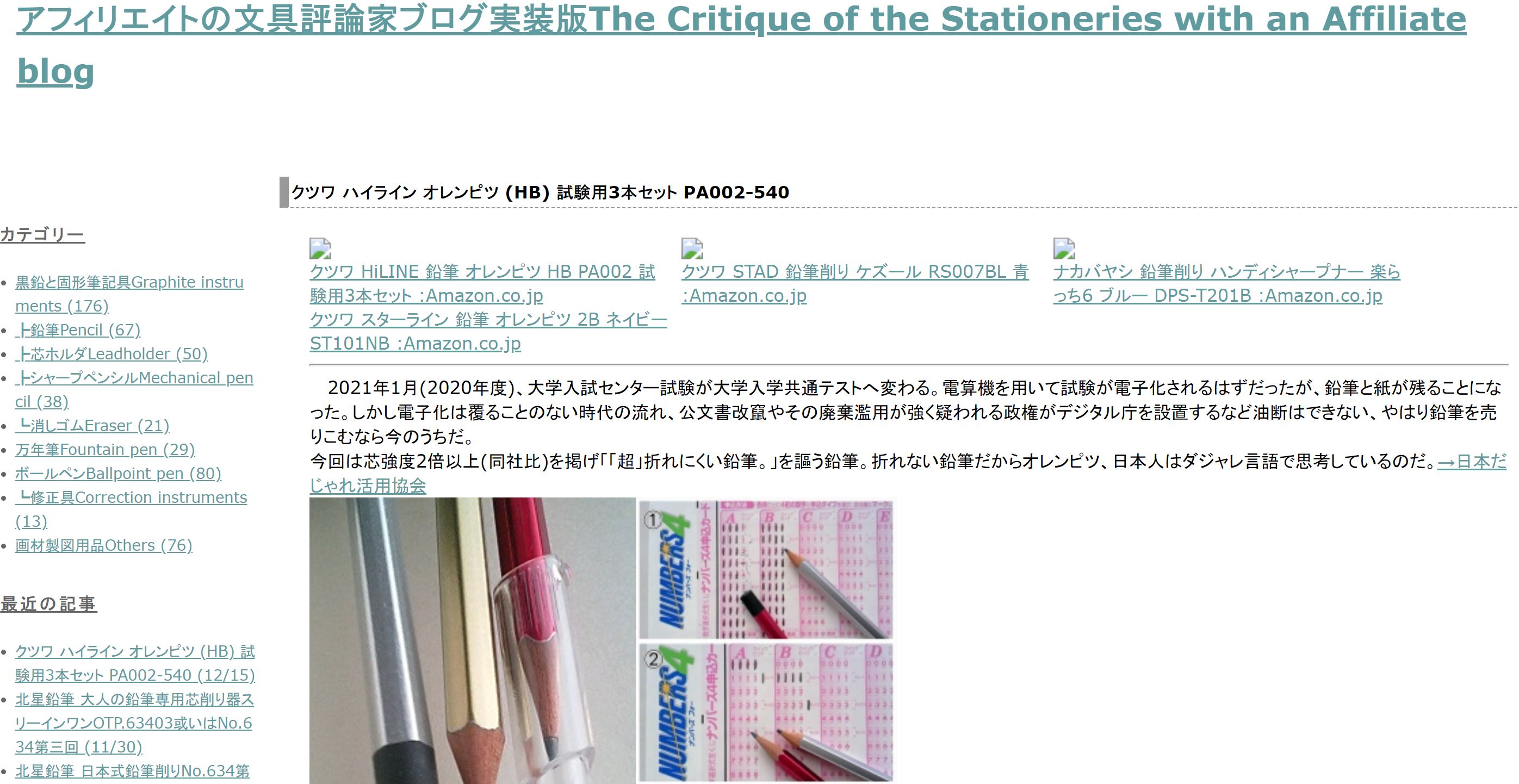 New to me is a 14 year old Japanese language stationery blog, the self-titled The Critique of the Stationeries with an Affiliate blog.

Stationery Critique has hundreds of very in-depth reviews and comparisons of Japanese and international stationery products including pencils and sharpeners. The product discussions often use multiple quantitative measurements. Reading it in translation, I had some challenges with the navigation but it is well worth the effort!

There is an excellent new pencil blog – Pencil Fodder.

UK based, Pencil Fodder has a focus on historic Keswick manufacturers. Today, there was a great post on a less known pencil brand, B.S. Cohen – Compressed Cumberland Lead Pencil.

Along with the Tennessee Red, heritage pencil maker Musgrave announced another product just as interesting to pencil aficionados – a pencil made from rediscovered vintage slats.

A bell rang for me when I first heard this, because NYC luxury retailer Mrs John L. Strong (now revived) used a very similar story to market an Eastern Red Cedar pencil just a few years ago. They similarly claimed a secret stash of Eastern Red Cedar. This blog wrote about that pencil in 2009 (coincidentally, beside a note about a layoff at Musgrave). The Mrs. John L. Strong pencil was photographed on page 33 of Marco Ferreri’s book Pencils: 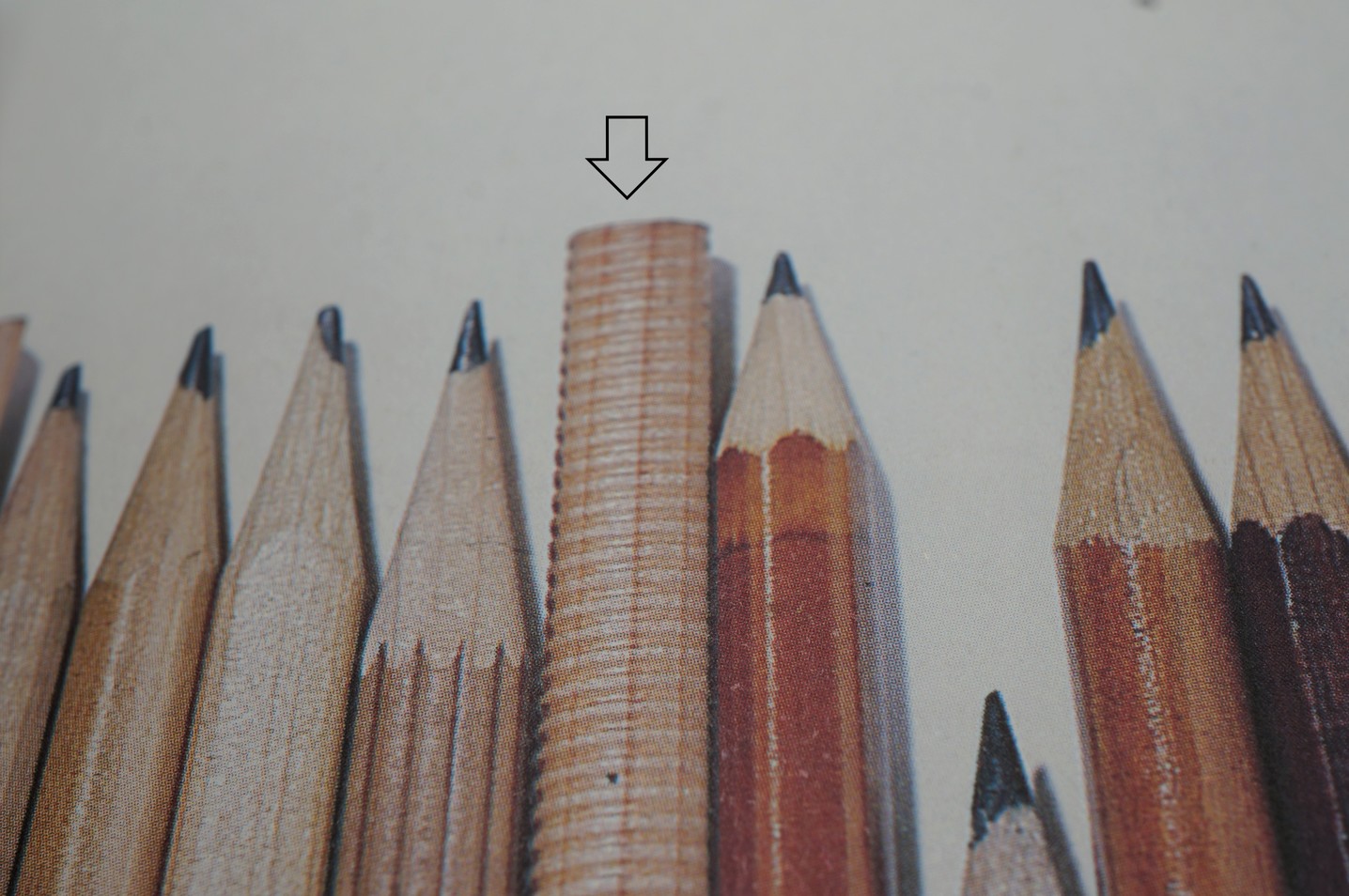 Though regularly mentioned online, I could not find a substantial written review of this pencil, and was motivated to contribute this effort.

The pencil is unsharpened, with a black metal cap. It presents itself with a lacquered dark wood body and a black imprint. The contrast isn’t high, but I think it is appealing. The pencil is offered in a cardboard sleeve. 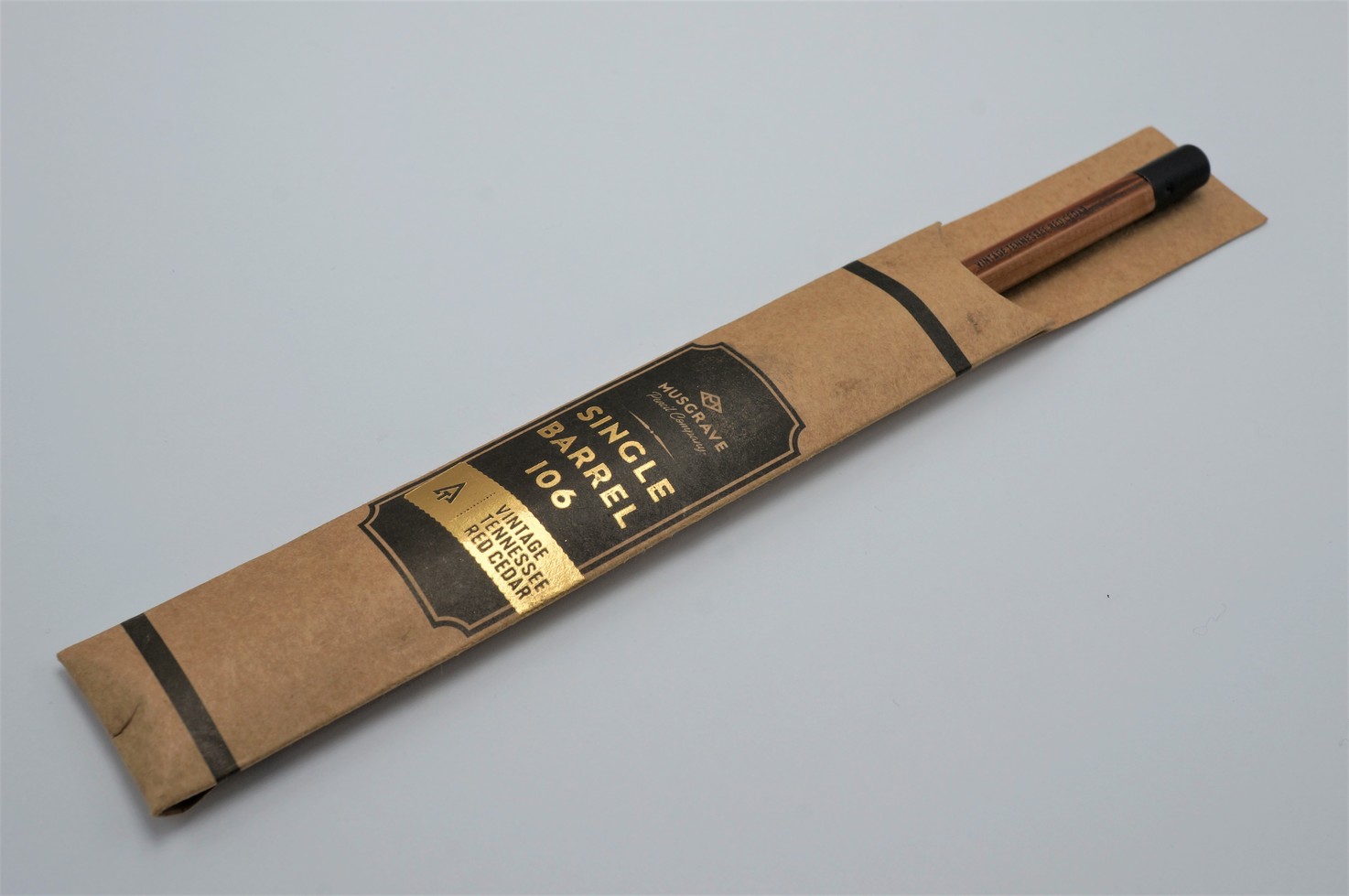 Technically, the lead isn’t off centre between the slats – the issue is more that one slat is twice the height of the other. 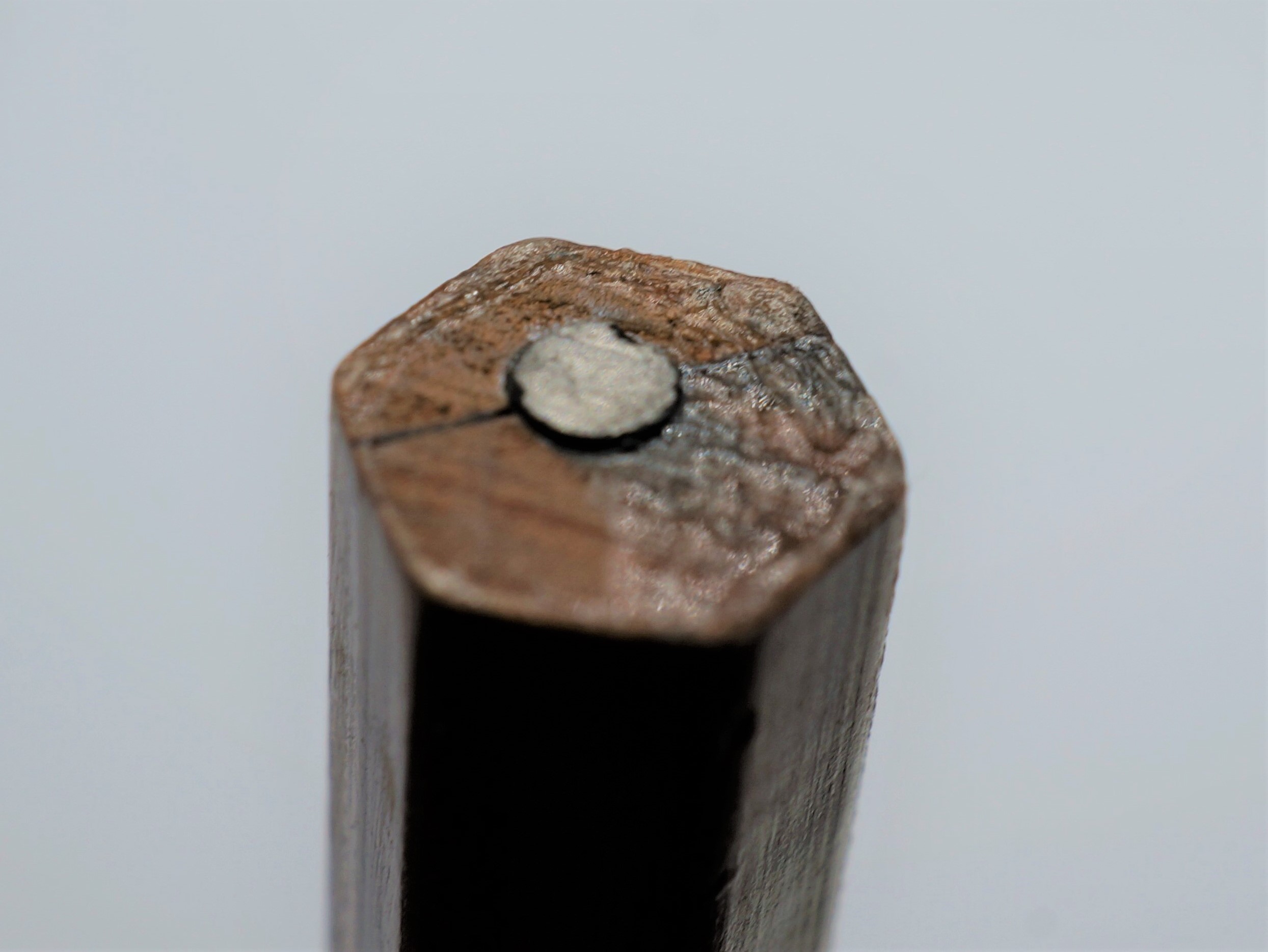 The imprints have a nice aesthetic. 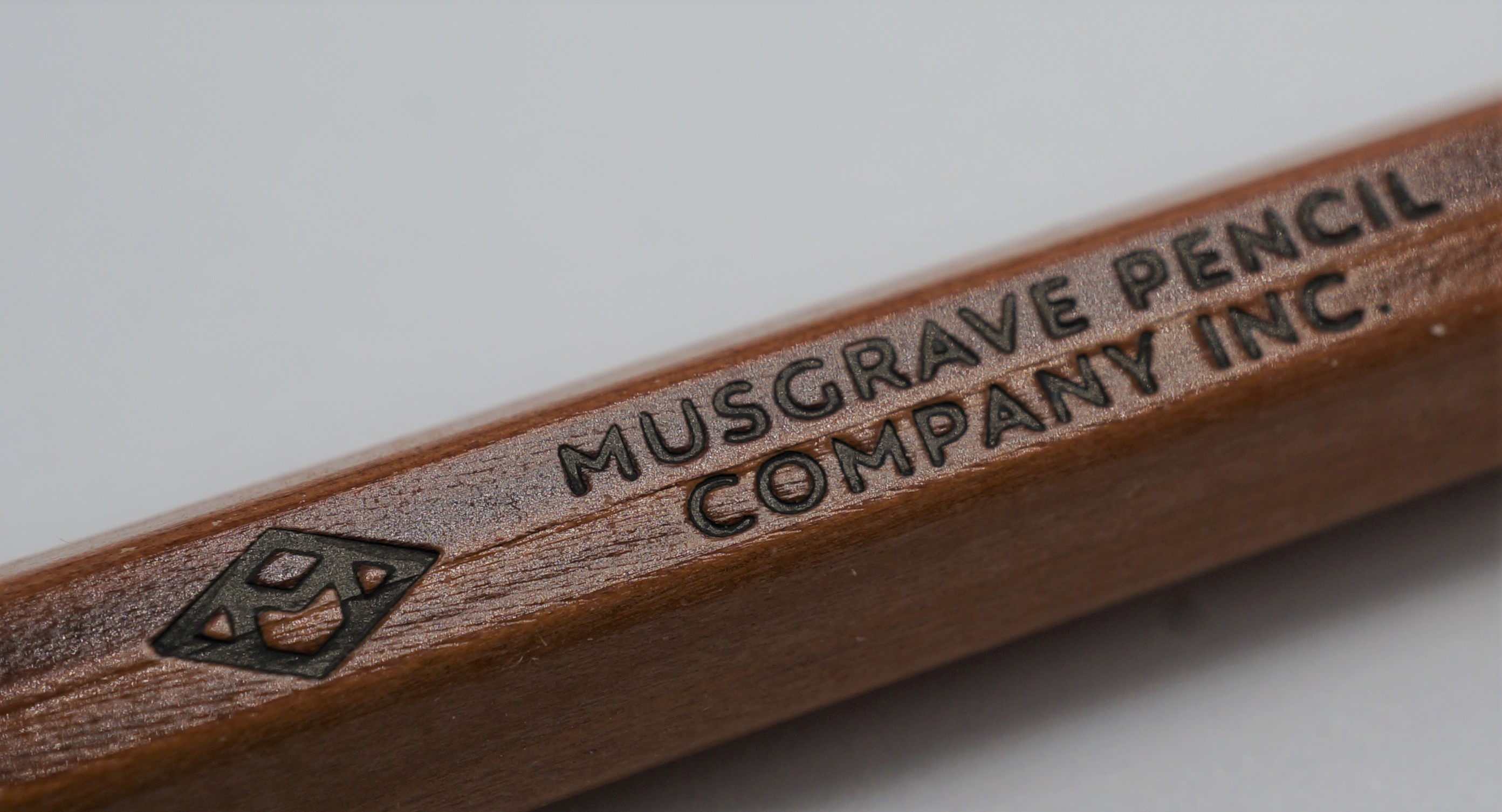 I thought a vintage sharpener might pair well with a vintage wood pencil. I broke out a decades old Eagle sharpener, but the results weren’t great. I tried a quick correction in an M+R 502, but the lead snapped. Did I mention that this is a $US10 pencil? So a dollar down, I felt it was time to get serious, and the impressive El Casco M-430 on the No. 2 (second most blunt) setting did a great job.

The pencil writes very nicely (the lead seems to be a step up from that of the Tennessee Red), with a dark line, nice glide, and minimal crumbling.

I’d love to know the lead origin. In 2008, a pencil industry CEO commented here that the US manufacturers, with an exception, made their own leads. But given the date, the comment may have applied to the then large US companies – Dixon and Sanford.

To summarize, there are some challenges, but I really like the story of this pencil. Telling me that the slat is 90 years old grants a lot of forgiveness.

I note that just like Mrs. Strong, Musgrave has found a way to sell a pencil at the price point of the Graf von Faber-Castell Perfect Pencil. I’m not a professional marketer, but I salute Musgrave for this breakthrough.

The pencil is gaining some superfans – people purchasing large quantities and sharing photos online, especially since Musgrave lifted a two per customer limit. I am really curious about where this offering may go.

Please allow me to recommend the blog Pencils, eh. With a focus on Canadian pencils, this blog offers a leadmine of information on both independent and international pencilmakers in Canada. I particularly enjoyed a post on the Dixon Chancellor, a historic pencil that used Canadian graphite.