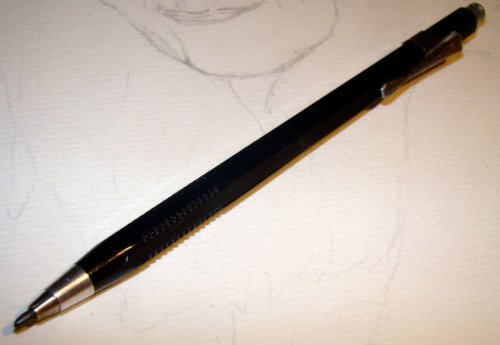 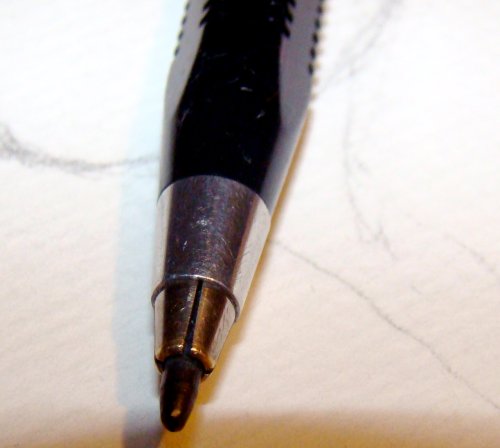 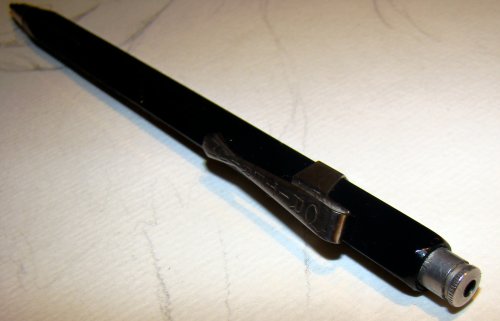 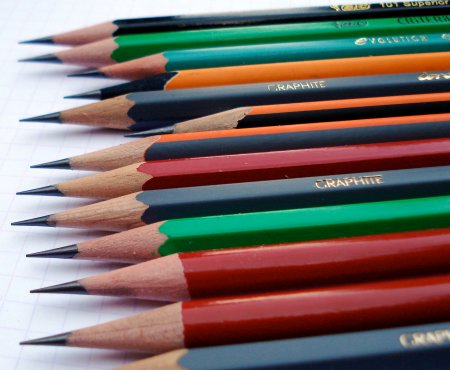 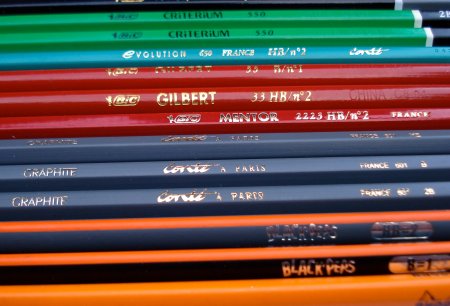 Let’s take a look at them together, and see how they compare. I am including these pencils from this month:

The Evolution Triangle pencil is not included, being an oversize specialty pencil. 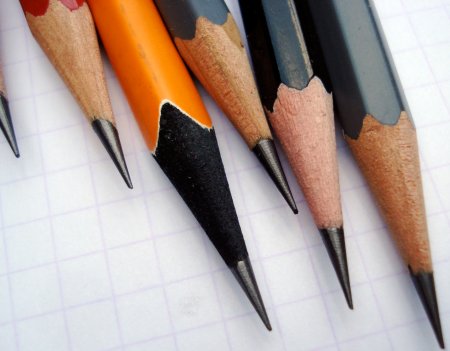 Samples of the following previously mentioned pencils were also retrieved from the pencil talk archives for this test: 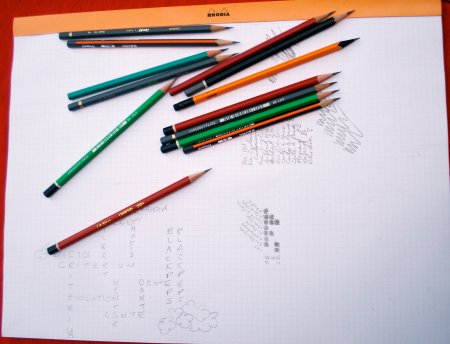 A Rhodia pad (a No. 38 in particular) seemed to be an appropriate test paper. I coudn’t find a French made eraser, so testing was done with a Spanish manufactured Factis.

Overall, it is clear that these pencils didn’t come from a North American office supply store – not a bland yellow pencil in the bunch! Each single pencil (except the Mentor) has an unusual colour or design. I like all of them, but the Black’Peps and Critérium 550 are the standouts for me. 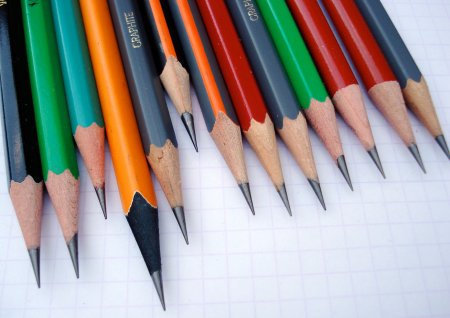 I tried sharpening each pencil in a Carl Decade DE-100 sharpener. Even the plastic Evolution. All sharpened well, but I noticed that the triangular pencils weren’t necessarily gripped properly. 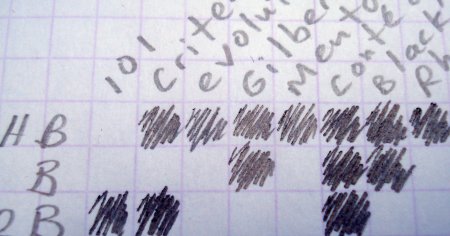 Laying down a line, I tried each pencil I had in grades HB through 2B. The Evolution, though perhaps having other merits, remained a weak performer in my view. The Mentor as well seemed scatchy. The nicest lines were from the Critérium, Black’Peps, and especially the Graphite 601. 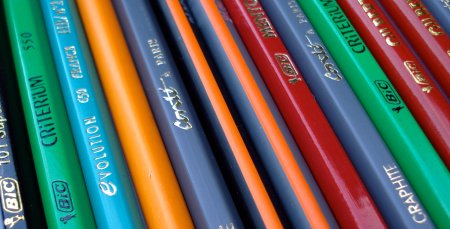 Handwriting erasure was a surprise – there were distinct differences. The Factis eraser on Rhodia paper cleanly erased the Critérium, Gilbert, and Graphite 601 writing – and had problems with all others. I suppose the specific formulations made the difference.

A number of these pencils have distinct merits – the Gilbert as a quality round pencil made in several degrees – the Black’Peps for innovative design in a triangular shape, the 101 for value – but I had no trouble in deciding that the Conté à Paris Graphite 601 was the best in overall quality. 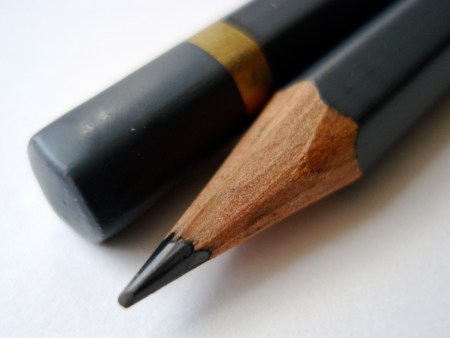 The Conté à Paris Graphite 601 pencil is a great find, as well as a rarity, being possibly the only woodcase pencil currently manufactured in France.

I was very pleased to discover that a small local bookstore had tins of these pencils on their modest art supply shelf.

The pencils come in a range of degrees from 3H through 6B, and are finished in a serious grey with gold lettering.

They are truly first rate – very rich and smooth, leaving dense, saturated lines. If better known, they could potentially be market leaders.

Now about the names – I thank the Paris office of ColArt, and blog reader Frank, for research assistance with the following.

Conté is named after balloonist, military officer, and chemist Nicolas-Jacques Conté, creator of the graphite-clay manufacturing process which is still used today, freeing manufacturers from the need to procure intact whole graphite pieces – which in the Napoleonic era, would only have been available from the Borrowdale mine of then-adversary England.

Akin to Newton and Leibniz, Conté’s contemporary Hardmuth was making similar breakthroughs in this era.

I’m not an art supplies historian, but Conté is also cited for advances in manufacturing sanguine and sepia pastels, based on pigments first used in the Italian renaissance – and still today.

The company (at least in name) seems to have survived almost two centuries, and was purchased in 1979 by Bic.

So what are all the various pencils we’ve seen, and what is this one?

The answer found in Bic financial statements is that they sold the trademark “Conté à Paris” to ColArt for 1.5 million Euros in 2004. The “Ballograf” brand was also sold as part of the same “return to core products” initiative. Essentially, Conté was seen as a focused high end brand, not aligned with Bic’s mass market strategy.

So wait a minute – “Conté”, “Conté à Paris”, what’s going on and what is the difference? Well the financial statements mention “Conté à Paris”, which is the name on ColArt branded products – pencils and otherwise. Bic has moved former “Conté” products to the “BIC Kids” line, while still selling older stock under the name.

So the agreement appears to involve a transition – ColArt uses and will use “Conté à Paris” for high-end fine arts products, and Bic retains rights to use “Conté” while it transitions to “BIC Kids” – school/children’s supplies.

So who is ColArt? Rest assured, they aren’t a name most of us would know – but they are the owner of leading artist brands “Winsor & Newton”, “Liquitex”, and many others. ColArt is in turn part of a Swedish conglomerate – but that’s as far as we’ll go investigating corporate lineage here.

The logos, particularly the rendering of “Conté”, are the same in both brands – no doubt by agreement.

Congratulations to ColArt for carrying on a tradition of excellence.

The Bic Mentor seems to be Bic’s budget line. Unlike the Critérium and and Gilbert lines, it is available in a single grade – HB.

The pencil is hexagonal with an unfinished end. It has gold lettering on a bright red finish.

The lead seems to be somewhat scratchy.

I’m not sure if these are in current production, but the Mentor appears to be one of Bic’s last made in France pencils still for sale in 2009.

My thanks to blog reader Frank for sending me this pencil. I’ll try to add a full photo at a later date. 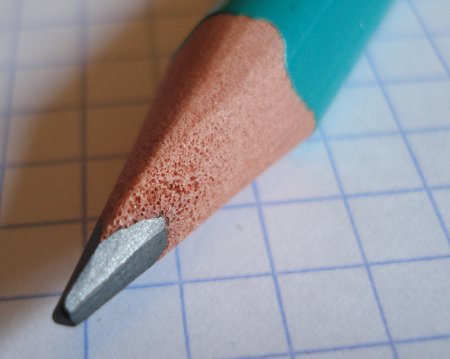 Let’s continue our look at the pencils of France.

It was over three years ago that we saw the Bic/Conté Evolution pencil. How time flies! This website has certainly grown quite a bit since then. (As has my pencil accumulation.)

The Evolution is apparently a favourite of the author of the remarkable La Vie Graphite. 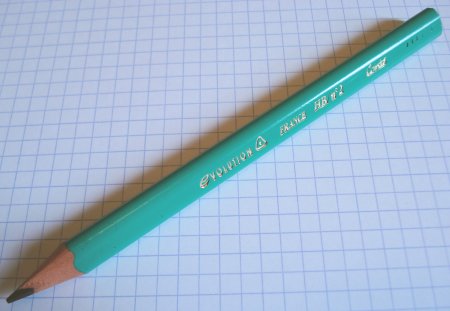 In 2006, I would have said non-wood pencils were a non-starter in the marketplace, but a recent visit to a university bookstore showed rolled-paper pencils being promoted front and centre, as examples of environmentally-friendly supplies! Many past pencil talk commentators have doubted such claims. 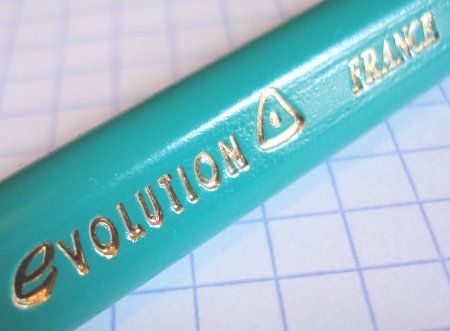 The Conté Evolution Triangle is a variant of the Evolution, offered in an oversize rounded triangle format, in a 140mm length (about 3/4 as long as a standard pencil). It appears to be made from the same extruded plastic as the standard Evolution.

I love the format – it is a very practical, and the pencil is easily held.

It has a consistent though light line. When pressed firmly, the line darkens considerably. Like similar pencils, it has some flex.

Some modern details regarding the Conté brand will be mentioned in a future post.

My thanks for Gunther from Lexikaliker for sending me this pencil.

pencil talk has some very informed readers! Frank, who kindly sent me two of the pencils that are part of this series, yesterday left a great comment which includes assessments of many of the pencils we’ll see this week – and others. 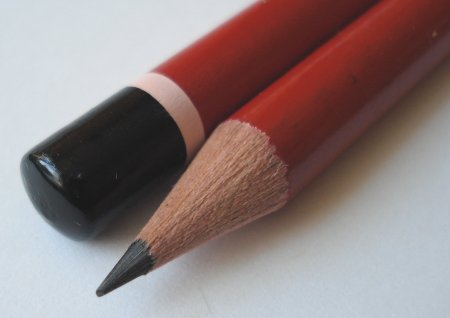 Today we see another Bic pencil with a longstanding name – the Gilbert.

It is a rare round pencil from a major manufacturer. The style – red body, black cap, white cap ring – is traditional and seen in many vintage writing implements. I don’t know the design’s origin.

Made in 3H though 3B grades, the shape plus range constitute a unique offering for a mainstream pencil. The two I have, in HB and B, write nicely (especially the B). The only issue I see is the finish – it doesn’t match the quality of the writing experience. The white cap ring is washed out, the imprints slightly blurred, and the lacquer, while not bad, not at world standards.

Like the Critérium 550, they appear to be made in China.

Also recommended, if you can find them.

My thanks to Gunther from Lexikaliker for kindly sending me these pencils.