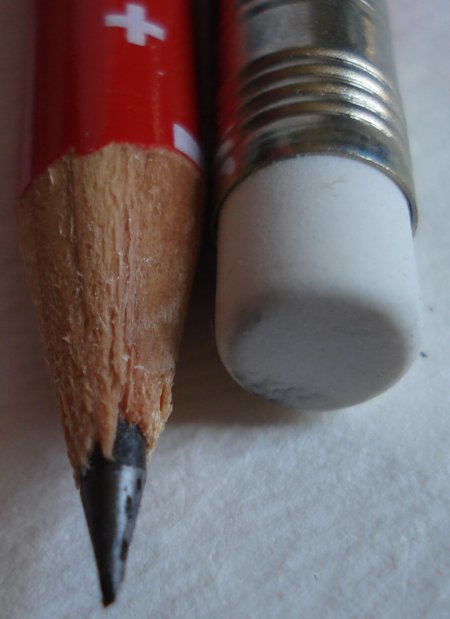 This pencil looks like it could be a marketing or novelty item. It lacks an imprinted name or model number. The pencil is made and sold by Caran d’Ache under their own name as part of a larger product campaign.

The graphic is striking – a red background, with white crosses. The matching ballpoint pen is sold as the ‘Swiss Flag’ pen in the ‘Essentially Swiss’ series, so I am calling this the Swiss Flag pencil. Let me know if you have a more correct name!

This associated set is interesting in itself. There are many matching pen and pencil sets – with ‘pencil’ meaning ‘mechanical pencil’ – but I can’t think of another set where one can buy a ballpoint pen and matching woodcase pencil.

The pencil is round, with a silver coloured ferrule and white vinyl eraser.

One pencil had a lead break while sharpening, but I couldn’t repeat that problem. The top photo shows an imperfect sharpening, with maybe a bit too much wood sharpened away. I would blame the sharpener, except that the sharpener continues to do fine with other pencils – and I tried more than one Swiss Flag pencil, more than once. So, I think the photo reflects my experoence.

The lead isn’t a standout, though not bad.

Overall, I think it is a nice, not too serious, fun pencil.

The offerings of Caran d’Ache continue to intrigue.

At first glance, the 351 resembles the Technograph 777. But wait – there is a ferrule and eraser attached.

And the bar code is back in black, imprinted on the pencil’s reverse side. No nice peel-off plastic as was done with the Technograph.

I tried the 351 (a 351-2 to be exact) next to an HB Technograph 777. I really had to do quite a bit of testing to try and convince myself of the Technograph’s superiority. I wasn’t completely successful. In the end I would say that these pencils are very similar – in that range where differences aren’t immediately clear.

While I don’t have any official context, the 351 would seem to be an office or school pencil – but it writes as well as the high end version. Good stuff!

I don’t usually evaluate erasers on woodcase pencils, but I tried the white vinyl eraser on the 351, and it is a surprise, being quite good on a variety of types of paper.

Another point of interest is the FSC (Forest Stewardship Council) logo on the pencil. This would make it one of the first retail pencils from a major manufacturer to carry this statement.

Overall, the 351 is a very impressive pencil. 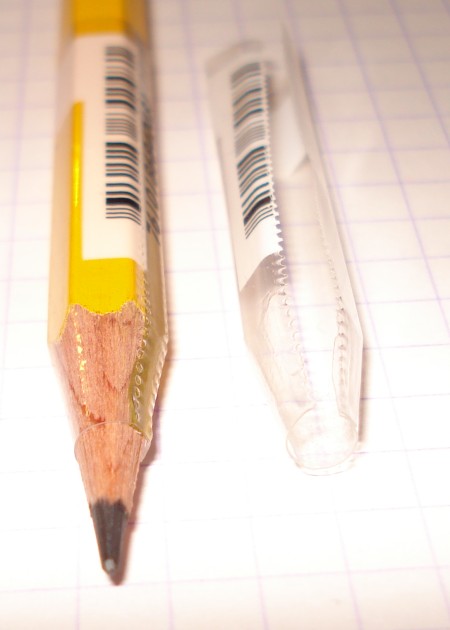