Along with the IBM Electrographic pencil, IBM also manufactured lead for mechanical pencils.

The box is inscribed on the side:

The bottom contains these instructions:

Mark with firm pressure on a sharp point. Keep the point sharp by turning the pencil after each mark. This will produce dense black marks, in which the particles of graphite deposited by the lead are so firmly packed that electricity can pass from one end of the mark to the other.”

The box itself has a wooden frame, and appears quite sturdy. I’m lucky enough to now have a few 0.9mm mechanical pencils, but these leads are 1.18mm, and my sole pencil that can take this diameter is a Yard-O-Led.

Unfortunately, the Yard-O-Led requires a Master’s degree in pencilology to change the lead. (And some people complain about the inconvenience of sharpening woodcase pencils!) Still, past practice likely helped, and I succeeded in the challenge.

I don’t know what results a few decades spent in the box might have had, but just like the woodcase pencil’s lead, the line drawn is remarkably rich, smooth, and black. Not just a darker grade, as in 4B vs. HB, but more luminescent as well.

The combination is nice, and the thick lead and dark line just might cause me to start using the Yard-O-Led pencil on a regular basis. 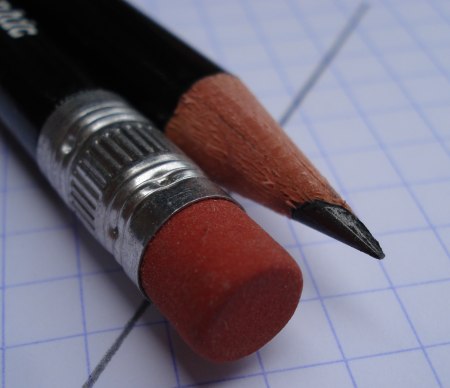