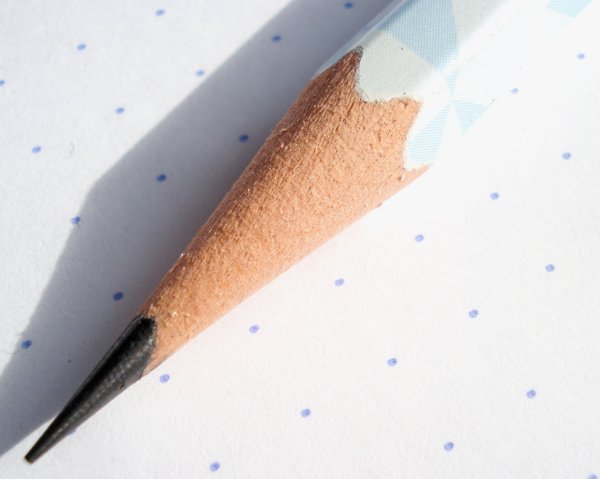 The Mitsubishi NanoDia pencil is supposed to be something special. The graphite is claimed to benefit from some important and noteworthy quality advances.

The line was announced in 2008, and started with mechanical pencils refills; woodcase pencils were introduced a couple of years later. The features of note include strength and density.

Now considering this matter, I’ve been wondering just how a major pencil manufacturer introduces product improvements. Paint or wood improvements are probably simple enough to introduce, and won’t likely disrupt the user base, but a change to a graphite formula could cause problems. A key differentiator of the top global pencil lines – the Hi-Uni, the Mono 100, the Castell 9000, or the Mars Lumograph 100 – is that they remain the same high quality product, and perform the same way, year after year, decade after decade. That they remain absolutely reliable and stable as tools for artists is a main selling point over readily available and less expensive alternatives.

So how then, does an improvement get introduced? Well, perhaps it depends on what the feature is – if the strength of a lead core can be improved without changing other pencil characteristics, then that feature could possibly be integrated with the main pencil line. But any feature that changes the feel of the lead on paper, or the blackness or luminescence of the line, or the known chemistry between the graphite and paper, probably has to be directed elsewhere. And perhaps even making the lead stronger might be seen as too much change to a formula.

So if Mitsubishi did find a way to make a graphite core denser and smoother, one can see that they may have had a problem on the matter of what to do with their discovery. An established line can’t just be altered. So the features went into a new product – the NanoDia.

NanoDia? Nanoscopic diamonds? Well, graphite molecules are no doubt the cousins of diamonds in the carbon family.

The pencils look like (and are labelled as) a product for children. So what about the scientific advances said to be in the formula? Shouldn’t this be a product in Mitsubishi’s premier Uni range? Here I am lost – if the product is what it claims to be, why is it priced and packaged as a lower end item? 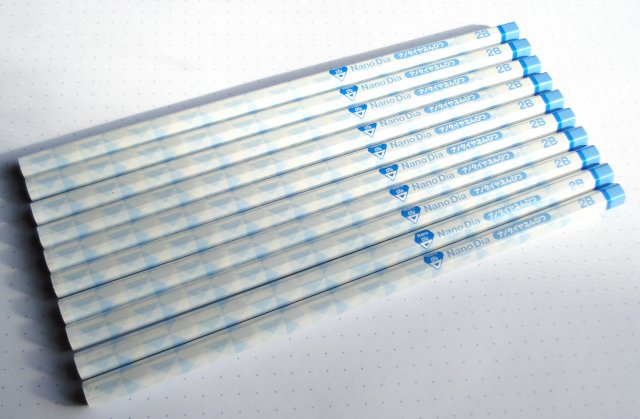 So regarding the pencils – they come in B and 2B grades, and a choice of green, pink, or blue finishes. They are hexagonal with unfinished ends. I bought a box of the 2B with the blue finish. 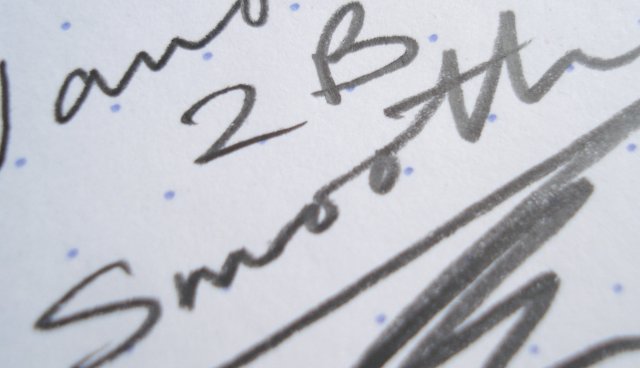 The pencil does leave a notably dense, rich, black line. I like it, but am undecided about the appearance.