The first natural finish woodcase pencil I saw or used was the Blackfeet Indian Pencil. By “natural finish”, I don’t mean unfinished, but rather a pencil with a clear or almost clear varnish that shows the natural grain of the pencil’s wood.

The Blackfeet is no longer made, and wasn’t widely available even at the height of it’s production. It was the first pencil I wrote about on this blog, and clearly has a following. Today, there is only one (which is more than zero) natural finish pencil I can buy locally – the Papermate Canadiana. That’s not a completely accurate statement if I include carpenter pencils. But, for general purpose writing, the Canadiana is alone.

Thanks to the wonders of the ‘net, I have been able to acquire a few more.

The Musgrave (by Musgrave) was unknown to me until offered on pencilthings.com. The first thing I thought was that is was a really traditional style pencil. The pencil is wider than most modern pencils, and most noticeably, the edges of the hexagonal shaped case are sharp – not rounded. It feels quite substantial in the hand relative to most pencils – the larger circumferance and the feel of the edges make it unique.

The lead is quite dark for a pencil marked as an HB. The finish is a highly varnished, shiny clear finish, with gold markings. The ferrule is gold and maroon, and the eraser white.

The California Republic Prospector has the roughest finish and worst looks of these pencils. I have several of them, and can see that there is little attempt to hide flaws in the wood. The varnish is thin and the pencil is rough and slightly uncomfortable to the hand. As a writer, the lead is a bit scratchy, though not bad. The gold lettering and ferrule don’t seem to work as design elements.

The Forest Choice is a Thai pencil. The almost-URL printed on one side makes it appear as an advertising item (which I suppose it is in some ways, except it wasn’t a freebie at a conference.) It’s sharp looking, with black stamping, an unshiny finish, and a green ferrule and pink eraser. It’s also a nice writer, with a dark smooth lead. The finish is very slick – it looks quite polished, yet doesn’t aim for the varnished looks of the other pencils. The finishing method must have been a bit different.

To see how these offerings compare with my old standy, the Blackfeet, I sharpened one up. A No. 2, it’s not as dark as the other pencils. It writes very well – it’s a really nice, special pencil. The lettering, the dark woodgrain, the history – I wish I had a few more. 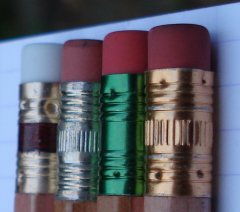 To me, there’s zero doubt about the best of these pencils. I love the Blackfeet, but the Musgrave writes so well, looks so sharp, and stands out so much that it’s a must have. Of couse, if you see a box of Blackfeet at a garage sale, don’t pass them up either.