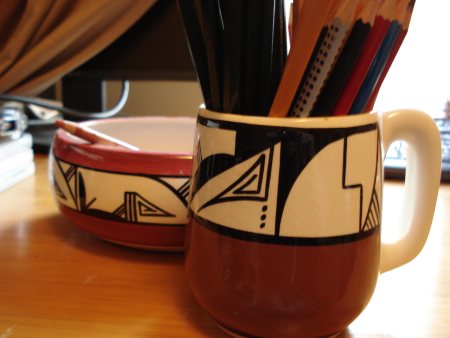 It’s almost two years ago that I wrote about the Blackfeet Indian Pencil. It remains one of the most popular posts at pencil talk.

While a lucky few were able to buy this pencil at retail, it never broke into mainstream distribution channels. The picture above shows some hand made ceramics that were sold along with the Blackfeet pencils in the early 1990s via specialty catalogs. Since a lot of people are interested in the culture around the pencil, this bit of context seemed relevant.

I recently gave the Blackfeet Nation offices a call to see if there is any news about their beloved product.

It’s not good. The Blackfeet Writing Instruments factory has been fully converted to another use, and all the pencil making equipment removed. With the machinery gone, a revival of the pencil isn’t even a remote possibility anymore.

They are sadly missed.