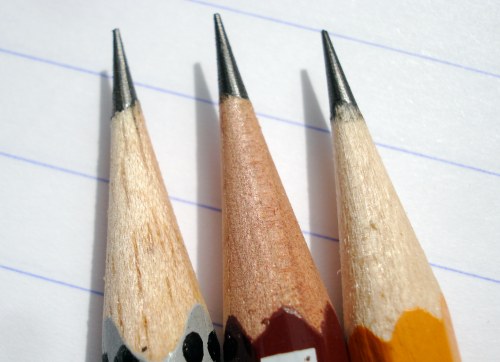 Readers have often asked about the wood used in pencils. With the exception of an informative comment by Harshad Raveshia about the situation in India, there seems to be little authoritative information on the subject.

Incense Cedar (Calocedrus Decurrens) is the familiar source, with slats provided by CalCedar supplying much of the world. They have competitors in the slat business, but I don’t know much about those other firms.

California logs are sent for milling in Tianjen, China and transformed into the “slats” that pencil companies use as their raw input.

Cedar is aromatic, long-grained, soft, non-splintering when sharpened, and in most parts of of the world, associated with quality pencils. It has a pinkish/red appearance.

Basswood typically is pale white with little grain showing. While the wood can be treated to become softer and the colour made to resemble cedar, the pencils are for me typically tough and sharpener-challenging. The appearance is a matter of taste, but I find the absence of grain to be less appealing.

I’ve been ribbed about lack of success in using a pen knife to sharpen basswood pencils. One really needs a craft or X-Acto knife to take on this type of wood by hand.

Jelutong is a species mainly grown in the rainforests of Indonesia and Malaysia. Closely related, Pulai seems to grow in Thailand (see Fantasia Pencil) and other Southeast Asian countries.

This species does sharpen easily, and I regard it as being as usable as cedar. Appearance wise, the wood has noticeable striations or pit marks. I don’t regard Jelutong as being as nice as Cedar.

A quick search reveals that many individuals and organizations have objections to the use of jelutong and pulai, as it comes from tropical rainforests. While the timber use (sometimes via illegal logging) is an issue – the disruption of the rainforest’s biodiversity is also often cited.

Of course shipping cedar logs across the Pacific ocean for milling can’t be good for the environment either.

LYRA uses Eastern White Pine and White Fir in some of their specialty pencils.

So, let’s ask – is a pencil’s wood species, and/or the source of the wood important to you? Is this based on a quality perspective, or an environmental perspective? Or maybe it isn’t important? Comments are most welcome! We also have a poll on this issue: