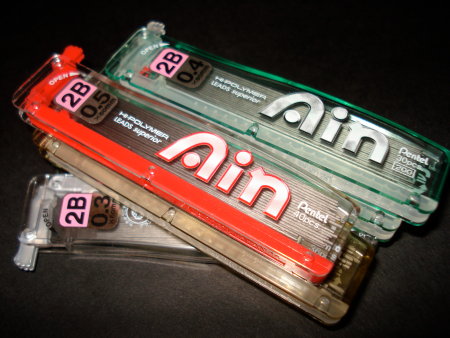 Hmm, has anyone noticed this aspect of mechanical pencil refills?

Pentel Ain refills (just to pick a particular brand) are all the same price.

And all are 60mm in length.

What gives? Thinner lead costs more? I would think one would get more pieces of thin lead per dollar.

Then single pieces of lead are:

That’s right – a 0.9mm lead is 9 times the volume of a 0.3mm lead! (Which makes sense as the volume is proportional to the square of the three-times-larger radius.)

So as to how much lead is in a Pentel Ain box: 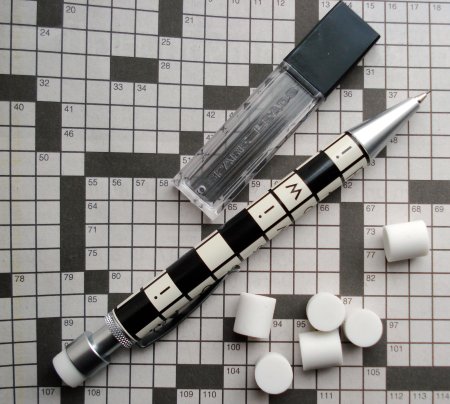 In 2006, Dave’s Mechanical Pencils had a great review of some interesting puzzle pencils from Retro 51 – mechanical pencils decorated with puzzle images.

Here are two more. I’ll mention that they are sold at much lower price points than Retro 51’s offerings. 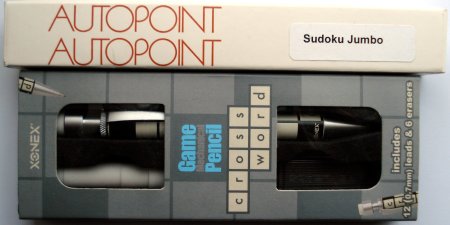 The Xonex Crossword pencil and Autopoint Sudoku pencil both convey fun and practicality – bold graphics, and uncapped oversize erasers (unusual in mechanical pencils), for those of us who like to be able to correct our mistakes.

The Autopoint features 0.9mm lead, with a tube of B grade refills and three replacement erasers. It is made in the USA.

The Xonex has a more modern 0.7mm diameter lead, with unstated grade refills, and six replacement erasers. It is made in Taiwan. 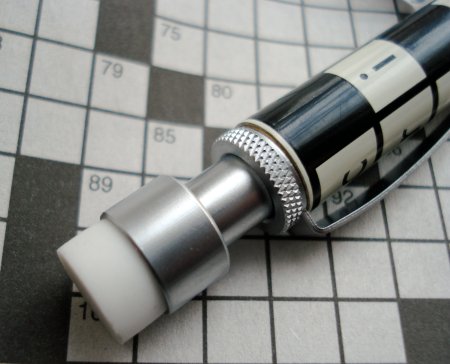 Both seem solid, and good values for their price. The Autopoint is thinner, longer, and more traditional in appearance. The Xonex is definitely on the modern side. I also like the Xonex’s vinyl eraser, though the grey Autopoint eraser also works quite well! 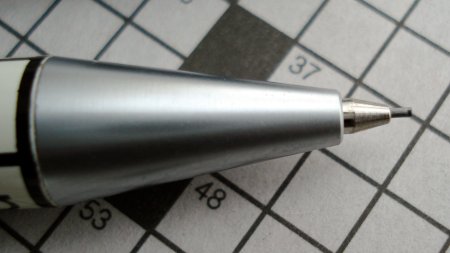 Their packaging is not as elaborate as that of the Retro 51 (especially the near-generic Autopoint), but either would make a fine gift. 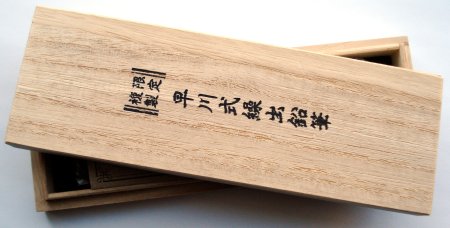 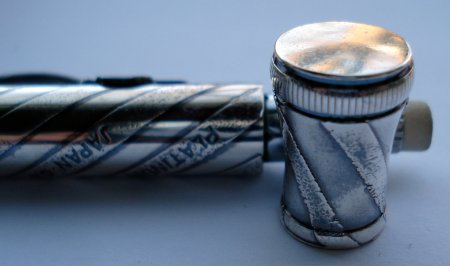 I’m not sure what was being commemorated fifty-six years ago today, but that’s the date inscribed on this vintage Yard-O-Led pencil.

Engraved pens and pencils typically have names or initials, but this one has a date. I imagine it being a birth, a graduation, an anniversary, or some other milestone of life that was being commemorated. Yet, it’s still odd to me. If you chose a gift like this, and chose to have it engraved, wouldn’t you put the person’s name on the gift?

The pencil is rolled gold in a barley pattern with a hexagonal body. It takes a 1.18mm lead. I bought it mainly to inform myself about Yard-O-Led pencils, as I’ve thought of acquiring one of their new pencils.

While almost exactly the same length as a Lamy Scribble (which I find very comfortable), this pencil is too short for the way I want to grip it. I want to hold the hexagonal part of the body, just as I would a woodcase pencil. But this winds up causing the cap of the pencil to hit my hand in an uncomfortable way.

As to the lead and mechanism – I could not at all figure out how to adjust the lead. I kept looking at the instructions over at Dave’s Mechanical Pencils. My results at times resembled parts of a Marx Brothers comedy. At one point the lead shot out of the pencil across the room. Now let’s be fair and acknowledge that this pencil is over a half century old, with provenance unknown. It may have spent twenty or thirty years in a damp basement or a humid yurt. Removing the slider from the barrel was challenging – it just wouldn’t move beyond a certain point. But it did come out.

That “slider grip” is the oddest piece. Being new to this pencil, and having noticed that it can shoot parts around a room (due to a capable spring), I was alarmed when the slider “disappeared”. It was there – then it was gone. I feared it was snapped off, or sprung into the yonder. I couldn’t find it. I did notice that the other bits of the mechanism – the piece that holds the lead in particular – were also gone. At this point, I was thinking that I’d broken the pencil. I tried fishing around the slider barrel (which has a narrow opening) with an eyeglass screwdriver. There they were – the parts were submerged, and with some toggling, re-emerged. I carried on, and can say – it all works, and I can now retract and extent the lead, and know how to refill it. As far as I can tell, my original problems were due to the “refill nut” (another unfamiliar pencil part) not being properly in place. It wasn’t my focus, but after it being properly fastened, the pencil started to work – from the point of view of the cap, clockwise motion extended the lead, and a counter-clockwise motion retracted the lead. That’s how it should be!

As Dave wrote, “Complicated or what!”

If I ever buy a new Yard-O-Led pencil, it will be in person so that I can try out the feel.

But – I’m still wondering, what happened fifty-six years ago today?

The Lamy ABC is a pen and pencil set aimed at children, though adults will have no difficulty enjoying these nicely made products.

The fountain pen is essentially a Lamy Vista in a pleasing wood and red plastic case. It takes Lamy cartridges or a converter. My version has a medium nib. It’s a tremendous value as fountain pens go – a great writer, smooth and highly reliable. The cap doesn’t post, which could be an issue for some, and has a space for a sticker with one’s name. It is really lightweight, even compared with a Vista, so it’s no trouble to transport around town.

Matching the pen is a mechanical pencil with a 3.15 mm lead. Unlike most clutch leadholders, which require pressing a button or cap and sliding the lead, this pencil has a really nice twist mechanism. Even Lamy’s more sophisticated looking (and expensive) Scribble 3.15 mm pencil doesn’t have this mechanism. There is also an included lead sharpener, which I love as it works with other 3.15 mm pencils, and is a pretty unusual sharpener.

The pencil is comfortable and writes very nicely. The lead is solid and doesn’t break. Though they ship with an HB lead by default, the pencils also take other hardnesses as well as colour leads from art supply stores.

It’s a mechanical pencil that offers great quality, as well as nice (though not traditional) styling.