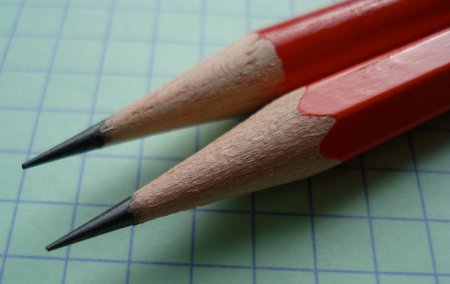 Staedtler is one of the world’s foremost pencil manufacturers. While many companies struggle to maintain a single mainstream pencil line, Staedtler has four global brands – Mars Lumograph, Tradition, Noris, and Minerva. They of course also have a number of specialty and local lines.

Note: The photos were taken on green Clairefontaine graph paper, and received no editing other than cropping. We won’t do it again. 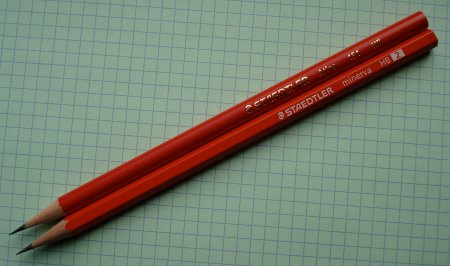 A previously mentioned interview with a Staedtler executive reveals that though the Mars line, dating from 1900, may be preeminent, the Atlas and Minerva brands are even older (though just by four years), originating in 1896. Amazingly, both brands survive 113 years later!

The pencils have similarities. Both are uncapped and have red (though not the same shade) finishes. The shape is a major differentiator. The Minerva is hexagonal, which the Atlas is a relatively unusual round pencil. 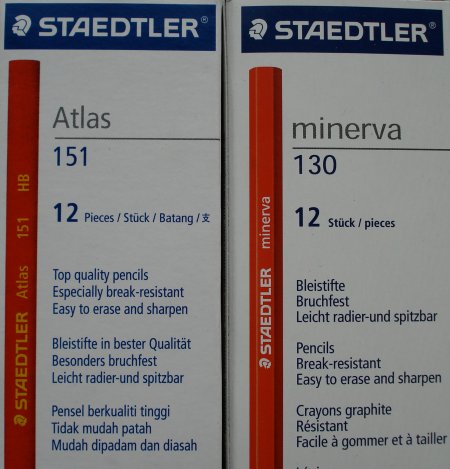 The Atlas has gold lettering, while the Minerva uses white.

The Atlas is made in Malaysia, with the lead core produced in Germany. The Minerva has no statement of origin.

The Minerva has an unusual aspect for a budget line – availability in three grades.

Both are budget pencils and write a bit on the scratchy side. I like the Atlas a bit more due to the richer red finish, absence of bar code, and round shape (unusual for a branded pencil).

Thanks to Gunther at Lexikaliker for arranging the purchase of the Minerva pencils.