About eight months ago, Sharpie announced a new product, the “Liquid Pencil”. As soon as I learned of it, I was excited to see what it might offer.

Of course, I have heard of the former Parker Liquid Lead Pencil through Penhero’s excellent article, and noted the similarity of the marketing, though fifty-five years apart:

Parker and Sharpie are now both brands of conglomerate Newell Rubbermaid, so it is entirely possible that the techniques of the original process are part of this revival.

The product launch had a lot of interesting elements, as well as some controversy.

Now if you look at those articles, you’ll see the controversy. The original “Becomes permanent like a Sharpie marker after three days” statement was withdrawn by Sharpie. See the timeline of reactions in these three Engadget articles.

On stationery blogs, I saw reviews at Office Supply Geek and The Pen Addict. The product didn’t seem to be winning over either of these reviewers. Yet, I still wanted to see what this pencil might offer. I told myself that I’d wait until it turned up locally. That day just arrived. 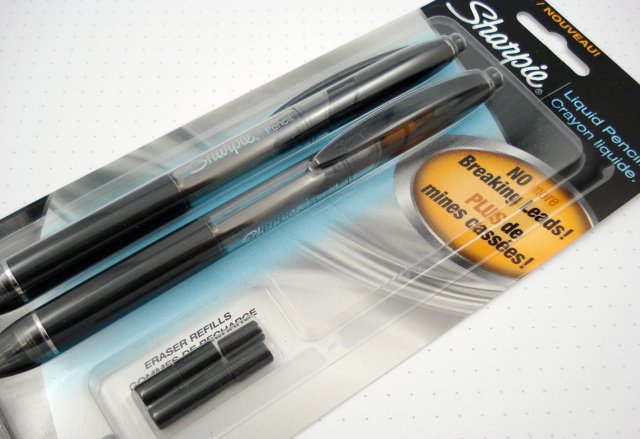 And on the back:

I won’t say much about the form factor or appearance. The product looks like a cheap ballpoint pen, and has some sharp ridges where the cap meets the body. The cap clicks to extend or retract the pencil point.

To my eye, the mark made doesn’t at all look like any graphite or pencil deposit I have ever seen. It has none of the luminescence or texture of graphite – ceramic, polymer, or water soluble. It simply looks like a ballpoint pen mark.

Writing with it, the problem is that the pencil barely functions by conventional standards. It just doesn’t leave a consistent line. The mark starts to dry up after a word or two (and that word or two isn’t rendered very well). It cannot render the dot in an “i”. Any woodcase pencil can do a better job. 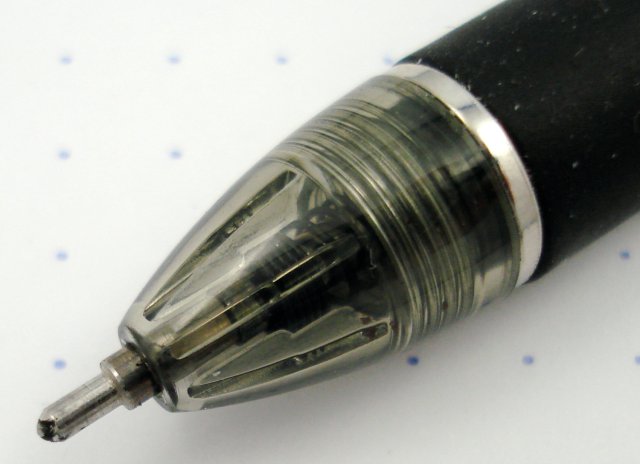 It does erase well, but that seems moot given the overall problem. It is hard to understand how this product was released to market.