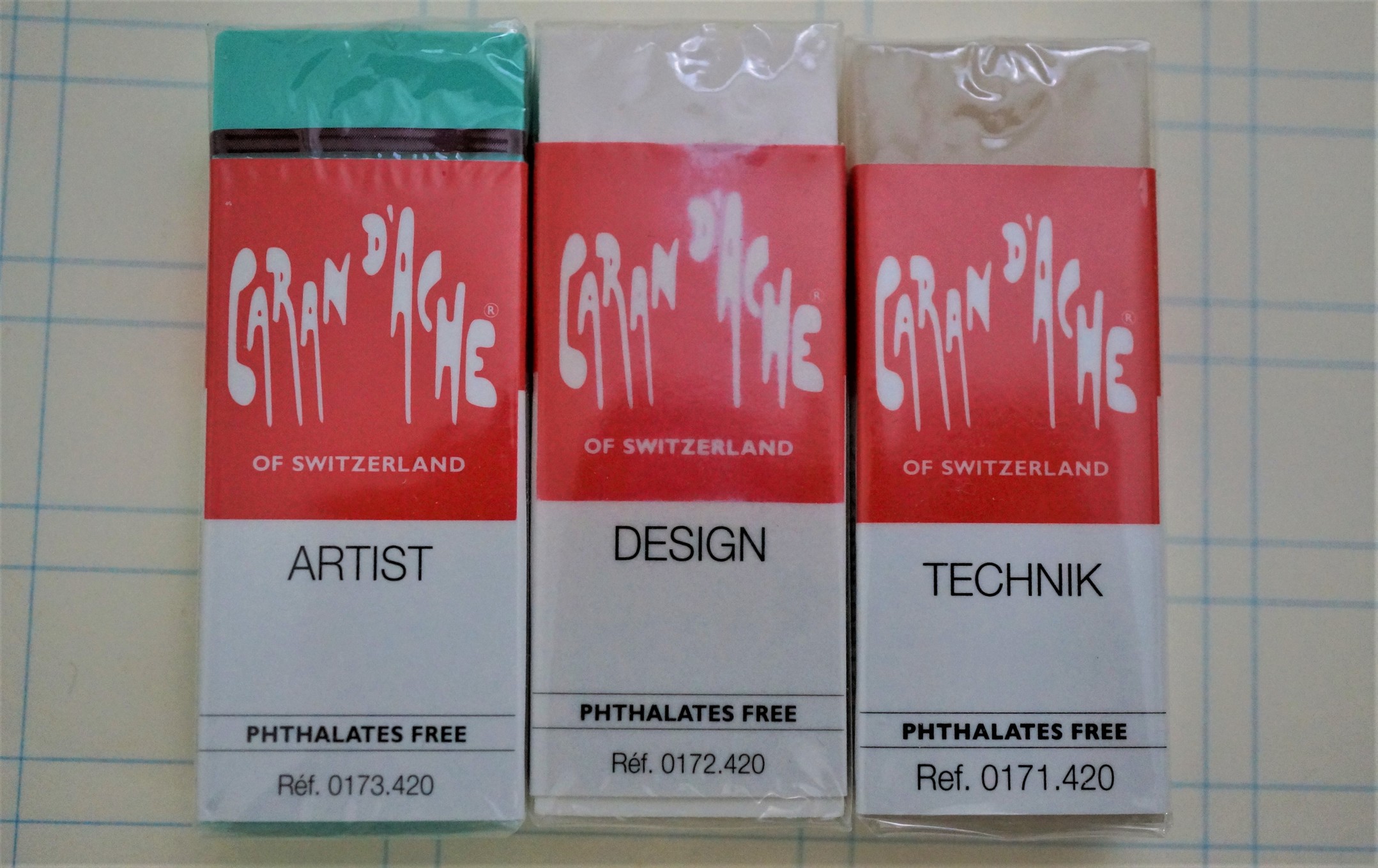 Wow, it has been a decade since the last comparative eraser review at pencil talk. I think the reason is that erasers have generally reached an excellent quality level. There are of course differences, but synthetic erasers from the top manufacturers in Japan or Europe are usually excellent, and the motivation to review them is diminished. 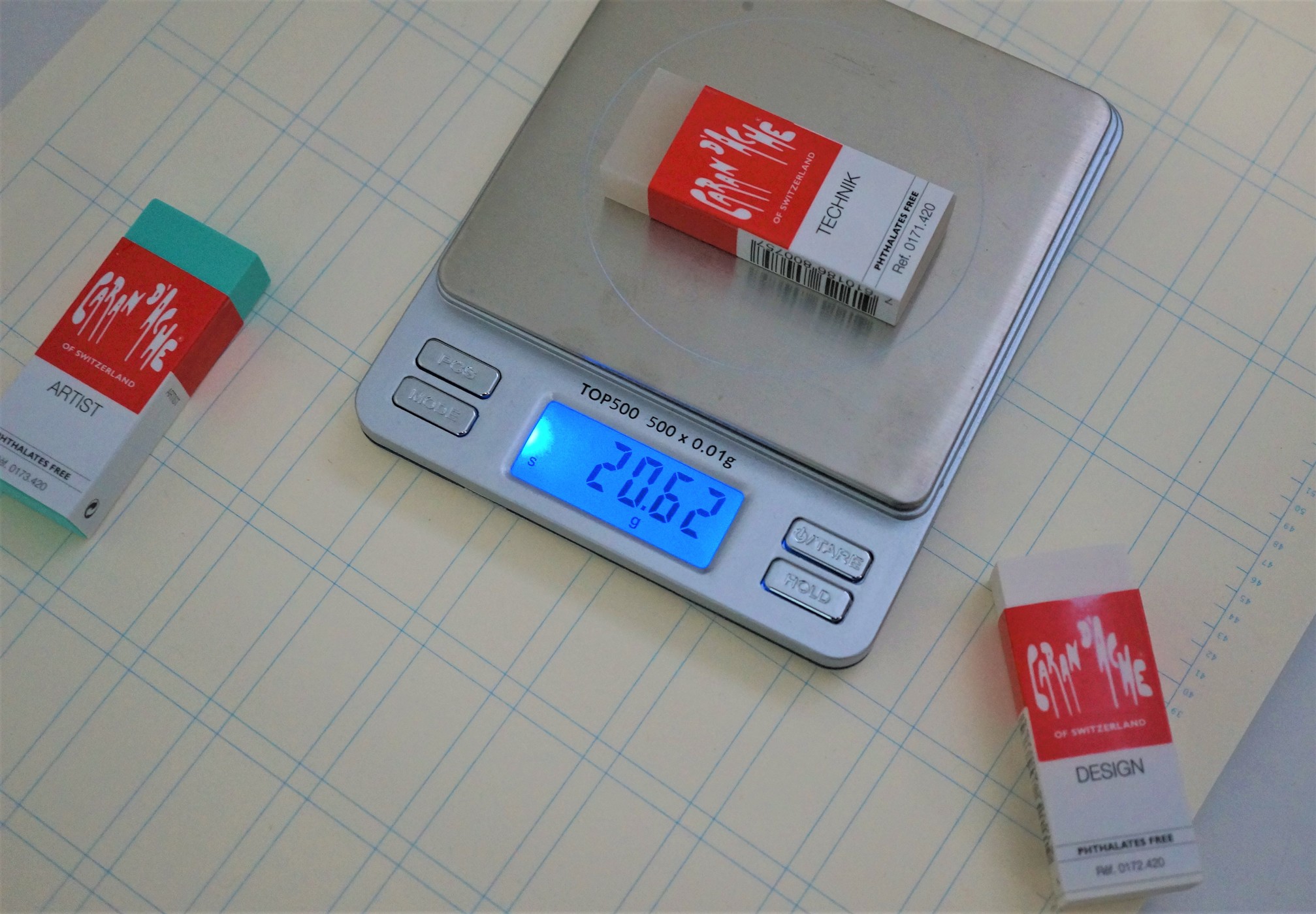 The Technik is the lightest.

The Caran d’Ache block erasers are interesting because of the shared dimensions, but differing appearances and stated functions. Caran d’Ache is also regarded as a leader in art supplies, and these products come with a reputation to uphold.

The three erasers are: 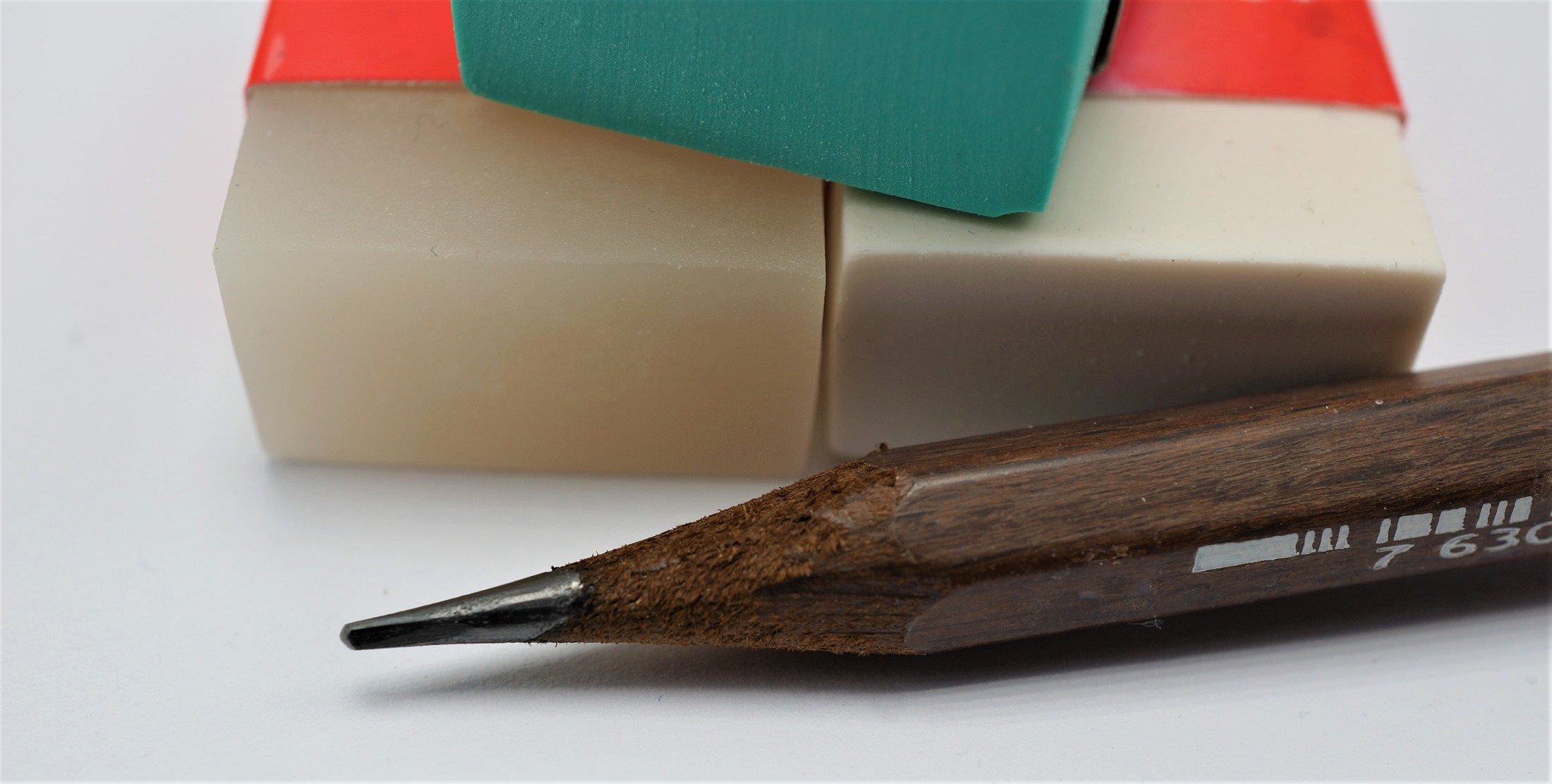 Years ago I sometimes set up very complex erasure tests, and there is indeed a complex pencil/paper/eraser/environmental factors relationship, but I wanted to keep this simpler – these erasers tested with one pencil and one test paper. I though a Caran d’Ache Swiss Wood pencil (freshly sharpened in an El Casco) would be appropriate, and decided that the Biella Index Card would be a nice companion. 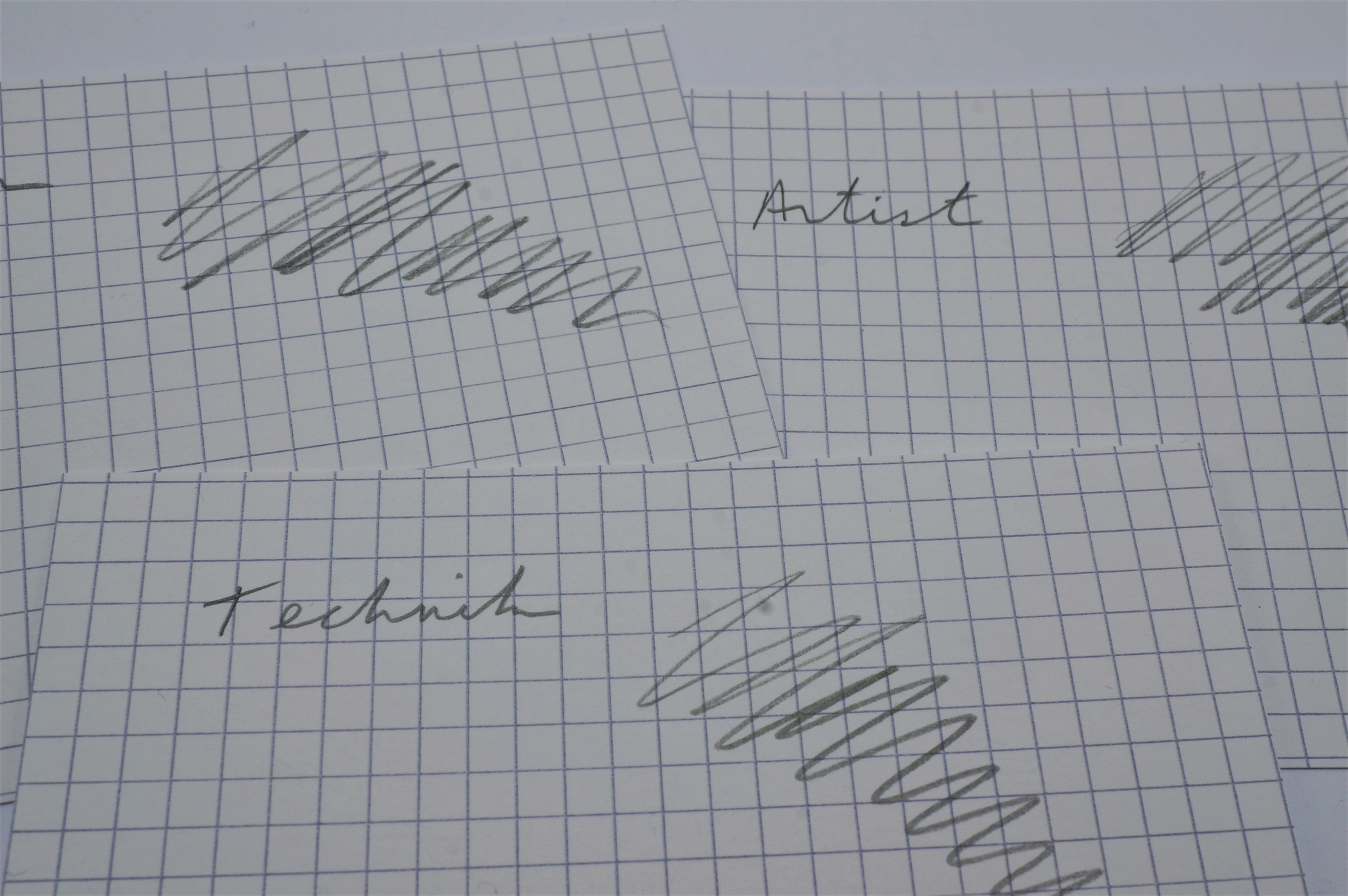 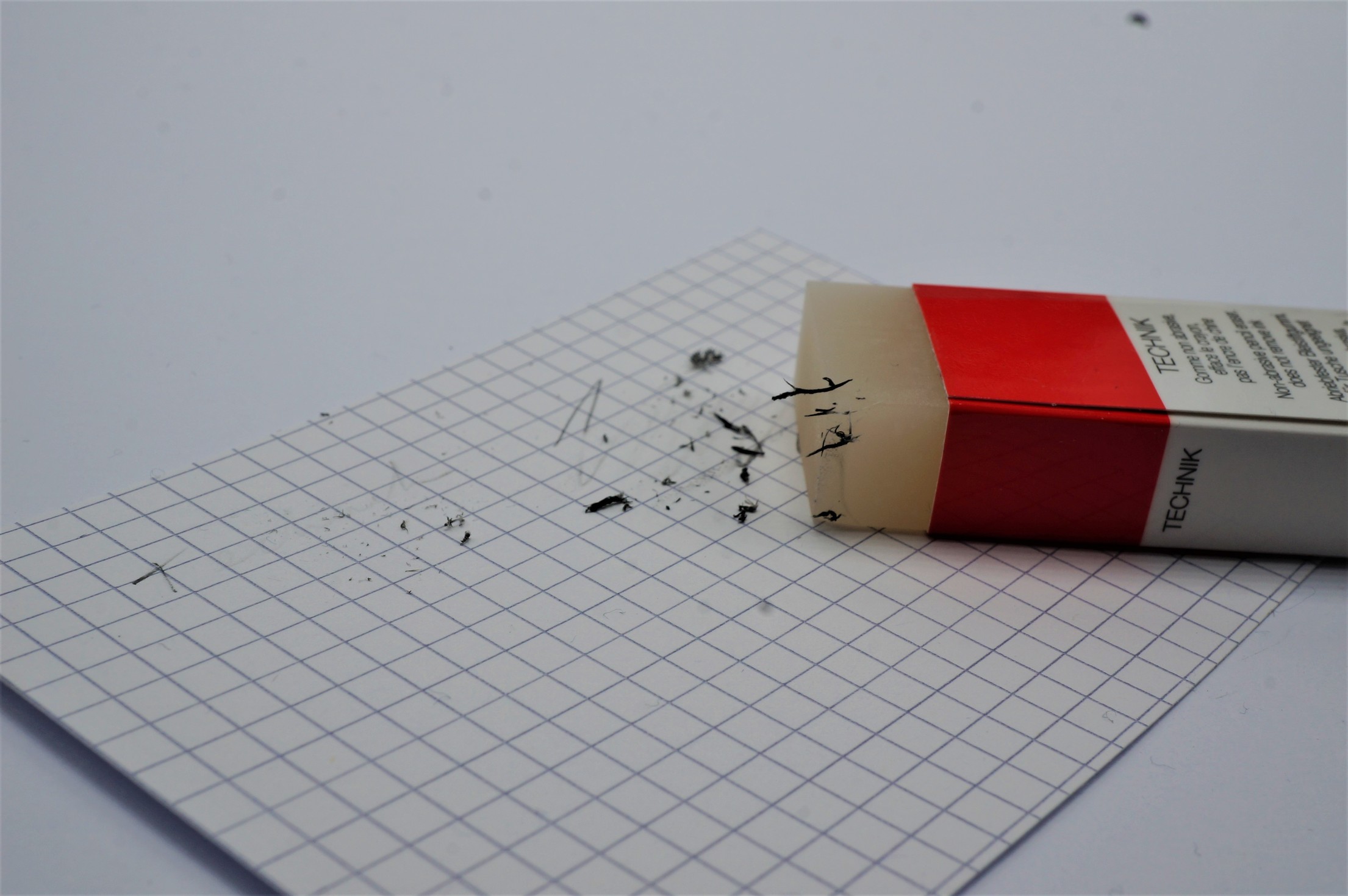 All three are much harder than erasers from Tombow, Seed, etc. They also produce fine granular residue, particularly the green Artist. The Technik probably did the best job at complete erasure, and the Design is the one that most veered towards aggregation of the residue in clumps. 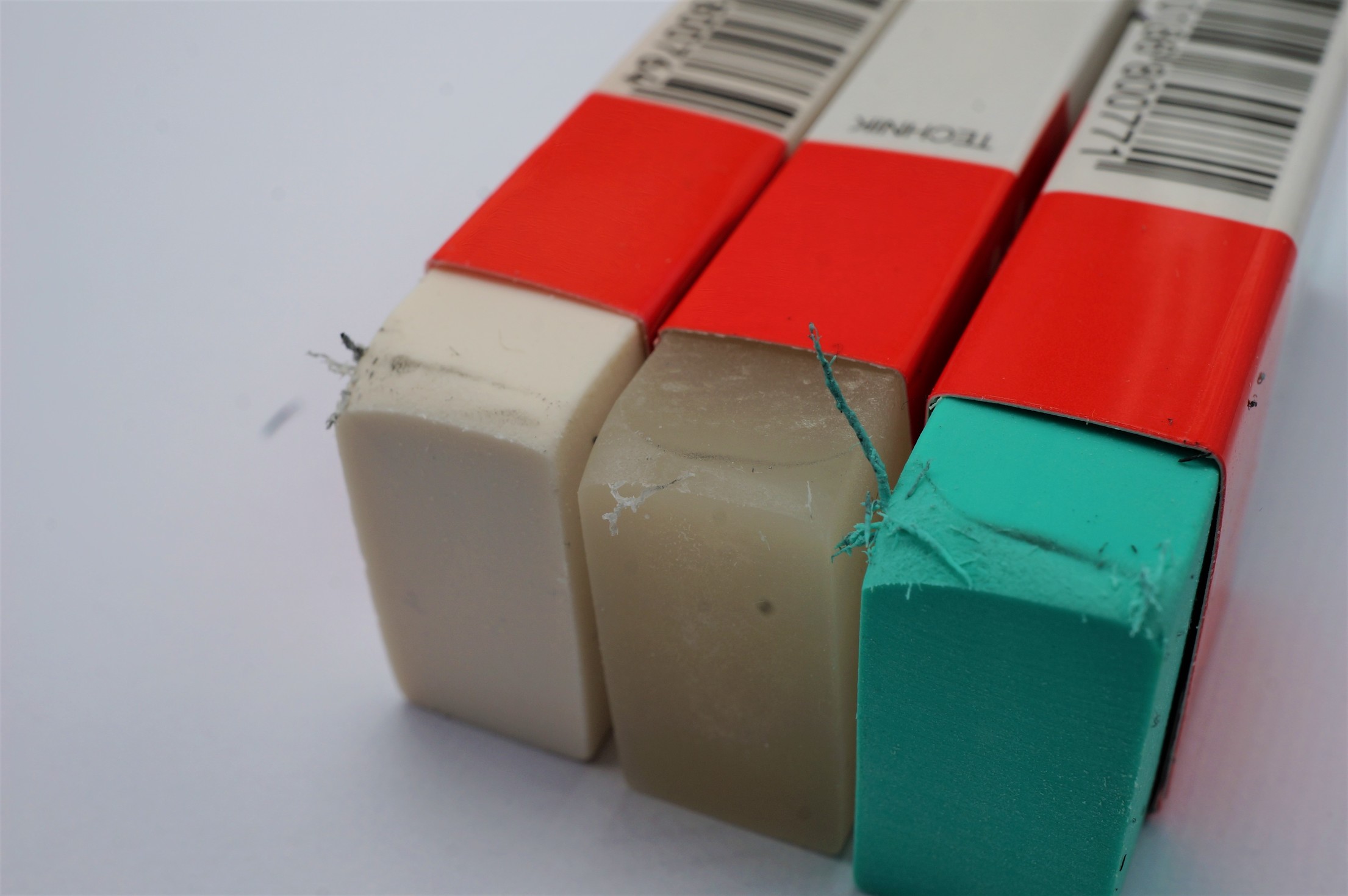 The erasers are good, but I don’t find them compelling when there are so many outstanding offerings available today. Of course, these are from Caran d’Ache.

Please allow me to mention a pencil that I’ve been enjoying. The Kutsuwa Hokusign has a strikingly rich and glossy finish (which I don’t like) and a phenomenal next level graphite core (which I do like).

Introduced to the market in 2019 by Japanese stationery producer Kutsuwa, the pencil is aimed at the art market. It is being marketed as being “twice as strong.” I think this claim could be true.

The pencil is made in Japan, and the wood appears to be cedar. A close look at the construction reveals some small flaws. It sharpens very nicely in the Möbius + Ruppert Pollux.

The imprint says, “Made in Japan Hokusign Hardly Broken Pencil.” Does HB mean “Hardly Broken”? It may be the case, though the grade is stamped on the cap. The pencil also comes in B, 2B, 3B, and 4B.

My dislike of the pencil’s finish is not a unanimous opinion – it won a 2019 Good Design Award.

Buntobi, via translation, says the colour is “Hokusai Blue”, used by Ukiyo-e artist Katsushika Hokusai. If I understand correctly, this makes the pencil name a pun.

What makes this pencil very special is that the lead is smooth and dark, glides well, and doesn’t break. There is even more – the lead lasts quite long without dulling, making the pencil a very good value. How is this possible? This pencil presumably uses a polymer core, rather than a standard ceramic core.

The Hokusign is highly recommended.

The official product page (in Japanese)

In almost every print and online source I’m aware of, the oldest known woodcase pencil is said to be this one:

It appears to be a partially woodcased carpenter pencil, and is on display at the Faber-Castell headquarters.

Abbey Sy has a photo rich report of a trip to Faber-Castell headquarters. Transcribing the English version of the display plaque shown in a photo, it says:

“Oldest known pencil
“This wood encased graphite pencil from the 17th century was found in the 1960s during restoration work on the beams of a house in Langenburg (Swabia). This pre-industrial pencil, made of lime wood with the methods usual at the time, was very probably used by carpenters in their work. It has been in the Faber-Castell Collection since 1994.”

But there are other known very old pencils. The Japan Writing Instrument Manufacturers Association and the Tokyo Pencil Association Shogokai cite two:

Tokugawa Ieyasu (1543-1616) had this pencil, which is said to have been presented by Dutch visitors:

The pencil is held in the Kunozan Toshogu Museum in Shizuoka Prefecture. Electron microscope analysis reveals the graphite is from 16th century Mexico.

This pencil has just stub of graphite at the tip and an advanced feature – a cap! Found in Masamune’s mausoleum at Zuihoden, it isn’t clear to me if the pencil was reburied.

The implication that the Spanish empire had 16th century access to a graphite source is also worth further examination by historians. 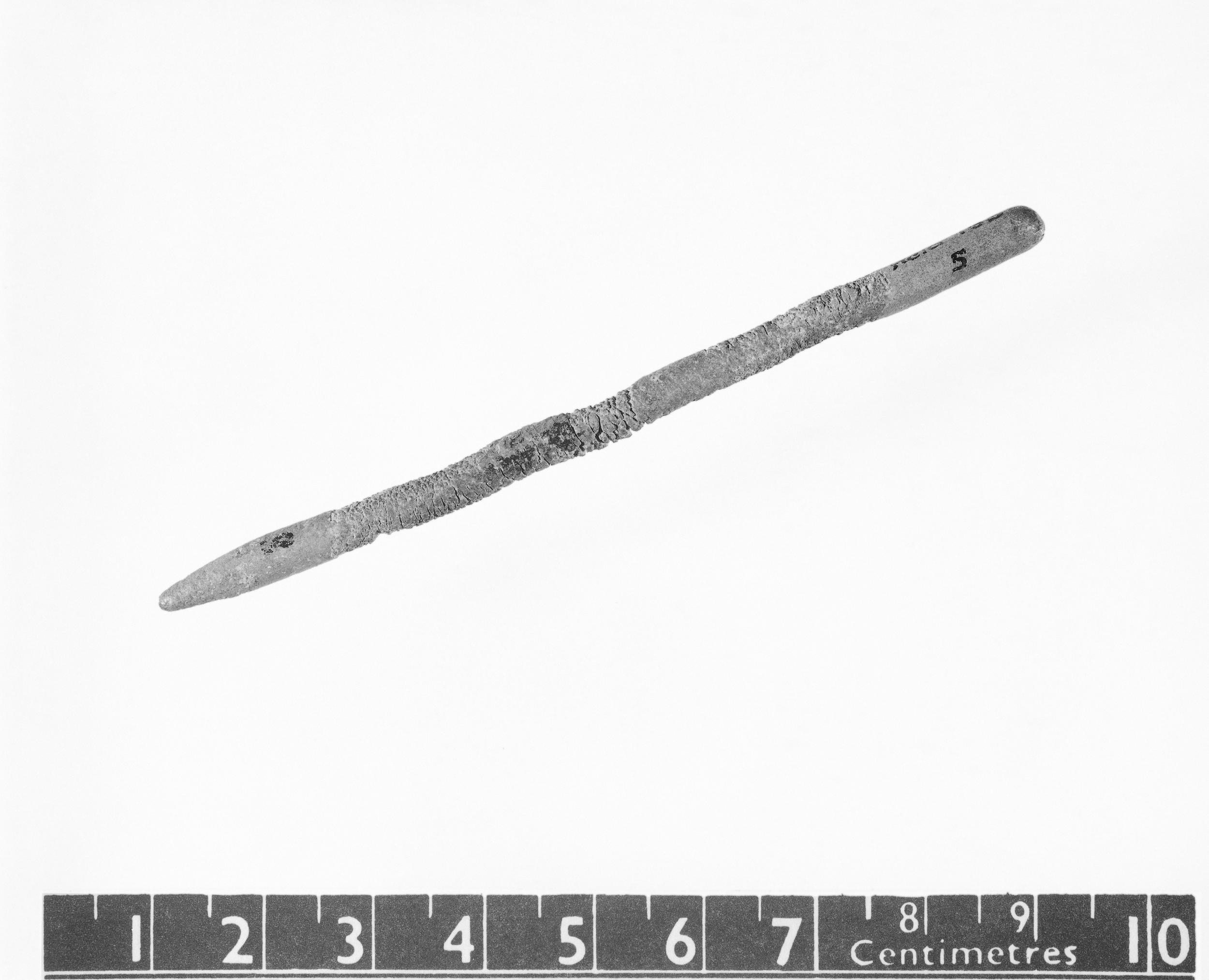 © The Trustees of the British Museum, usage via the Creative Commons Attribution-NonCommercial-ShareAlike 4.0 International (CC BY-NC-SA 4.0) license

Did lead (Pb) pencils exist? This notion has been regularly dismissed as a myth.

Two years ago, I saw a display of three lead pencils in a special exhibition at the British Library. They were clearly marked “Lead Pencils” by the curators and dated at approximately the year 1400. No woodcase pencils were displayed.

An important point here is that professional museum curators at a top global institution have deemed these objects (one pictured above) pencils, with no footnotes or asterisks.

The Pencil by Henry Petroski has a chapter, “Before the Pencil”, which details the use of reeds and feathers as early writing and marking tools, as well as the stylus, made of bone, metal, or wood. Some might say these lead pencils are styluses. They no doubt are, but I believe we need to differentiate two categories of stylus.

The first category is a stylus that uses pressure to make a mark: A harder surface makes an impression on a softer surface. So an iron stylus marking a wax tablet would be such an example. (Petroski notes these implements were able to double as weapons, and fulfilled this dual function in Roman times.)

The second type of stylus may have the same appearance, but is functionally different – a stylus of copper, silver, or lead has an intrinsic marking ability, and leaves a mark though the depositing of the element onto paper with contact. This category of writing implement is still made today.

The first type of stylus is definitely not a pencil because it can not leave a dark mark on paper – but how about the second? The photographed lead pencil is in the dimensions of a modern pencil. (Some thin (e.g. 2 or 3 mm diameter) metal silverpoint styluses are not – they are clearly too thin and can not be handheld in the manner of a pencil. They are something other than a pencil.

A very related matter also circles the definition of a pencil – must it be woodcased? Animal skins, string, and paper have been used to wrap graphite cores. A post here on paper wrapped pencils remains very popular, and they are still manufactured. Any many pencil companies make woodless pencils. At this blog, the term “woodcase pencil” has often been used to differentiate from mechanical pencils, but includes more than just the modern glued slat pencil. A working definition of pencils can reasonably include the outliers like extruded pencils, paper wrapper (and recycled paper) pencils, and woodless pencils.

If the definition is focused on a pencil being a handheld round cylinder – then bingo – this is a 620 year old early pencil.

So were there lead pencils? I hope that I’ve supported the notion that the answer isn’t a simple no – it depends on assumptions and definitions. I would love to know if the British Library had any internal discussions about their use of the term.