This blog reached the age of 15 at the start of this month.

The post was slightly preempted by a congratulatory message from Twitter user App4Soft who may have bookmarked a previous anniversary post and waited for the anniversary to roll around. I was surprised. Thank you App4Soft!

It is hard to write any sort of celebratory message these days. While my inbox is flooded with invitations to resiliency seminars, my personal thinking is more in line with the message I get from Michelle Obama‘s story. And that was three months ago. Rather than “toughen up”, I believe we need larger doses of compassion and humility.

These days, I don’t order anything online unless the vendor can tell me how it will arrive. Universally they don’t know (whether a small business or large enterprise) – they deal with multiple shippers and hand off the package, or trust a third party (which may be software) with the shipping. So I don’t buy online. What I’m particularly trying to avoid is having a package delivered to a nearby postal outlet co-located with a medical walk-in clinic.

All the local specialty stationers are now closed for retail. A month ago, one of them kept a locked door, allowing two shoppers at a time – but with no browsing allowed. A table blocked display access, and they asked one to not touch anything that might remain in reach. Not much fun. Another required appointments. And another shop proactively closed.

I am wondering if they should all just close their retail presences, try and hunker down for the next year, then try and reopen? They all seem to be slowly embracing online selling in different ways, but I’m concerned that will just lead them to competing with the entire world. There is no easy answer. Of course, I have no idea if any of these businesses are in a ten year lease.

There are also neighbourhood stationers who sell mainly school supplies and greeting cards – I know of one that is approaching a century in business, and I wish them the best in these tough times.

The website started as a blog with irregular looks at stationery and pencils. The first post was about Rhodia and their enigmatic orange writing pads. The post was viewed many times, and quoted elsewhere, yet never received a comment.

The second post was about the Blackfeet Indian Pencil. Two hundred words and an amateur photo, it has received dozens of comments to date, some of which are stirring reminiscences. If it wasn’t already clear at that point, any doubt was removed – woodcase pencils strike an emotional chord with many.

Though we’ve read Petroski’s book, Schulz may have been the master of the subject. Charlie Brown had some “pen misfunctions” while trying to communicate with his pen pal, and soon switched to pencil. His “Dear Pencil Pal” letters soon became a great ongoing essay and insight into the child’s awakening consciousness. This is at the heart of what a pencil really is – a writing implement, yet also an object imbued with humility and humanity.

The appeal of pencils takes many forms.

Carpentry pencils may be the oldest type of woodcase pencils – with rectangular or oval wood encasing , they won’t roll off a sloped roof, and epitomize the pencil as a working tool.

Test scoring pencils may have origins in the IBM labs, but are now used by students and test takers around the world. Their objective? Make sure their mark is read!

Steno pencils, used by shorthand practitioners and stenographers, are typically round and thinner than general writing pencils.

Copying pencils leave an indelible mark. A mainstay of commercial life before either fountain or ballpoint pens entered the world, they continue to have many uses.

Red and blue pencils are a fascinating specialty pencil. They are two colours of pencil in one – red and blue – potentially representing contrary conditions – debt vs. surplus, or even good vs. bad, yet also bound together at the centre.

Highlighting pencils serve to focus our attention on printed text, whether an office memo or a school book.

Yet the ordinary lead pencil – graphite and clay, baked in a kiln, remains at the centre of our interest. And we’ve only just scratched the surface!

First and foremost, two others who also write online about pencils, Gunther from Lexikaliker, and David from Dave’s Mechanical Pencils. They have both been sounding posts and sources of many creative ideas.

As well, other online presences – kero556 from Colleen Pencils and isu from the uncomfortable chair. Both kero556 and isu have graciously shared knowledge and pencils (only a portion of which I’ve shown) that completely changed my awareness of the possibilities of pencil making. Keen online observers will note that products in stores often follow the lead of blogs. If you appreciate the online availability in 2010 of Mitsubishi and Tombow pencils in Europe and North America, I would argue that some credit is due to these Japanese bloggers who reached out to Western counterparts some years ago.

I must also thank Nick of One Stop Japan Shop on eBay, who was an early enabler, even before Bundoki, Rakuten, et al.

Fellow pencil bloggers – Kent, Kim, Boris, Sean, Matthias, John, Akinobu, and others on the broader stationery front – Diane, Michael, and Cheryl – have all been inspirations.

From within the industry, WoodChuck from California Cedar, Harshad from Doms India, José from Viarco, and Katie from General Pencil have all been very kind. I’ve also appreciated the assistance at times from the public relations departments of Staedtler, Faber-Castell, Stabilo, and Lyra. These companies are done proud by their always professional representatives.

Let me specifically thank those who have sent pencils over the years – General, Musgrave, and Marco from within the industry. From individuals, people representing over ten countries: kero556, isu, Kent, Jieun, Robert M, Gunther, Matthis, Frank, David O., Diane, Sean, Barrel of a Pencil, Henrik, David, hemmant, dasmarians. Thank you all. I apologize if I have left a name out.

As well, let me give a special acknowledgment to the guest contributors. I regret that these contributions didn’t receive even more attention – every single one was first rate!

Children’s Books on Pencils by ZS. A bibliography of nine children’s books with pencil themes.

Get The Lead Out! by Barrel of a Pencil. A pencil themed crossword puzzle.

My father’s pencil by Finn. An appeciation of a special pencil.

These posts are all great, but I’d like to particularly mention Barrel’s contribution – Jim worked for months on the puzzle, responded to all issues with revisions, and even purchased some special software to be able to publish the professional looking PDF version. Thank you again, Barrel, it was a unique contribution.

So about the blog…

If the internet moves in dog years, we are grown up!

The initial motivation was to test this new “weblog” phenomenon I was hearing about. Though they were options, I didn’t want to write in a public forum about family or work. Stationery, and pencils in particular, seemed like a harmless and pleasant subject. Little did I know that years later, the blog would become part of an unorganized yet very real international community.

There has been criticism for focusing on the means rather than the end. But an interest in the means hardly excludes an interest in the end, and even the most casual look at those interested in pencils reveals a very broad range of highly accomplished people in both arts and science realms. These people are creators of that “end”. Further, I think the blog has often shown that pencil making is itself a form of craft, and sometimes art.

There have been some regrets. It isn’t a paying job, so there are inevitable slowdowns and gaps in posting. (The last couple of months are an example.) As well, responding to email queries has been a challenge at times. Finally, there seems to be no way to write about pencils without having and using pencils. Without intending it, I have accumulated way too many pencils to use or enjoy them all.

Thank you to all the readers and commenters for your support over the years.

This blog is now one year old! The first post was on an iconic stationery item: the Rhodia pad. A year later, we’re happy to welcome an accompanying Rhodia pencil. 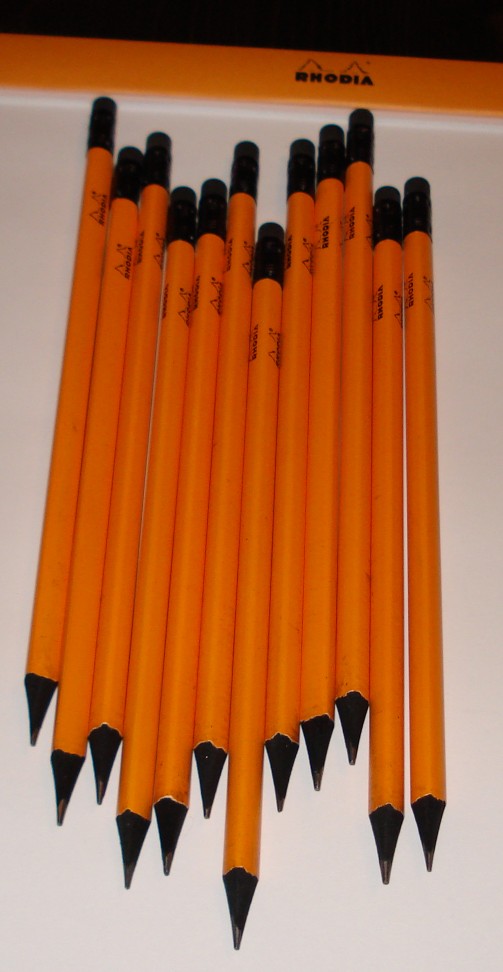 The pencil is painted in Rhodia’s famous orange. It’s very distinctive, with a triangular body, black dyed wood, black ferrule and black eraser. The imprinting is minimal: each side has Rhodia’s two fir tree logo and name.

I’m not sure how well the photo reflects this, but the pencils were covered in graphite dust when they arrived. And not just a light dusting – enough that I’m not sure they can all be fully cleaned up. It seems very odd for a pencil at this price point. The Palomino is the only other pencil I’m aware of with this presentation issue.

The pencil handles nicely, and the lead is rich and dark. I’m not a huge fan of erasers being on a pencil, but these seemed sleek, and are very effective at erasure.

There is no country of origin stated, though I have a suspicion.

Overall, they’re nice pencils, and ideal for jotting notes in your Rhodia pad.