As a sequel to our recent look at Mitsubishi’s 10B pencils, here are two special pencils in the 8B grade.

First is the Hi-Uni Super-DX. A few pencils have passed this way since the website started in 2005, and I have no hesitation in stating that this is the nicest, most refined finish I’ve ever seen on a woodcase pencil. There are several coats of lacquer which create an impression of depth, with tones ranging from cherry red to rich maroon popping out, depending on the light and angle of viewing. The advanced craftsmanship that went into designing and creating this pencil’s surface is exemplary. The gold lettering and cap are nicely contrasting.

The Hi-Uni 8B is one of five new grades that was introduced by Mitsubishi for the Uni’s 50th anniversary, along with 10H, 7B, 9B, and 10B. Premium Japanese pencils all have first rate finishes, and it is a testament to the Super-DX that it makes the Hi-Uni look relatively ordinary. 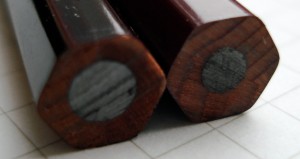 The core diameters are quite different – the Super-DX is oversized like the 10B pencils, while the Hi-Uni is closer to traditional size. 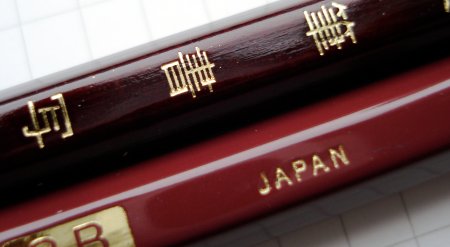 Both are great pencils, leaving super dark and rich marks. Yet – the formulas seem to be different, with the Super-DX being even smoother and waxier. Others who have tried both pencils agree.

The Hi-Uni Super-DX is an amazingly great pencil. My apologies, as I don’t think these photos give it full justice.

(The pencils were photographed on a Maruman Mnemosyne 182 notebook, which seems to handle graphite extremely well.)