Congratulations to Tombow, who are celebrating their 100th anniversary in 2013. The company has a special site with many photos to commemorate the anniversary.

As part of the celebration, Tombow has issued a recreation of a vintage pencil, complete with packaging. The pencil is internally a Mono 100, possibly the world’s finest pencil, so there was no skimping on quality. In Japan, the product sells for about $15. Alas, the price in other countries reflects several additional costs. (As an aside – the top Japanese pencils are reasonably priced inside Japan. If only they had better global distribution channels!)

I initially balked at the price I first saw for this anniversary pencil, but read that only 100 boxes were made, so it really is a limited edition. Fueled by a love for Tombow’s pencils, I decided to indulge. (I’ve since seen that Tombow USA sells the set for $15 – I wish I had known.)

There is an outer sleeve with a graphite rendering (in progress) of the pencil box’s design. I think this is one of the best parts of the recreation: 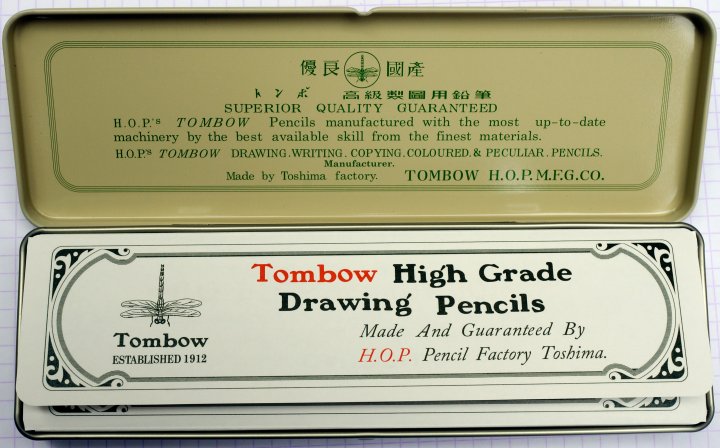 The product is great – a tribute to the past while using modern production techniques. I am grateful that Tombow took the effort to create something for themselves and us – the citizens of pencil nation. (I cannot imagine that there is any financial return for such a small run of a specialty product like this.)

I am also pondering the number – 100 sets for 100 years? Or is 100 the realistic number of people who will purchase something like this? Or is a distributor who acquired 100 sets making an exaggerated claim? This blog has advocated for historical pencil recreations for years, and it was a disappointment that a major pencil company anniversary a couple of years ago didn’t give a nod to the past. But maybe they knew something?

And a note – despite what I’ve read from Tombow, this thing called the web informs me that a set in grade 4B has been issued in some Asian countries.