Regular blog readers may notice a certain slowing of the pace. Let me assure you that it isn’t a loss of interest! In fact, the blog’s fifth anniversary is only three months away, and there will be a celebration. Yet, for the time being, high temperatures are resulting in a necessary focus on just getting through the day.

It could be worse – news reports indicate the northeast US, Italy, Germany, and Russia have all been hit with even more serious heat waves.

It seems, even some of my personal favourite Faber-Castell Grip 2001 pencils have been affected:

In some cases, the “dots” have expanded and merged:

In the worst case, the “dots” broke open, leaving marks on both the paper and my hand!

While I’ve mentioned this pencil’s great design many times over the years, this is my first practical problem.

It seems that even pencils can’t take this heat!

Two knowledgeable pencil talk readers in particular have regularly sung praises for this writing implement, and those comments assisted me in deciding to purchase one in February. 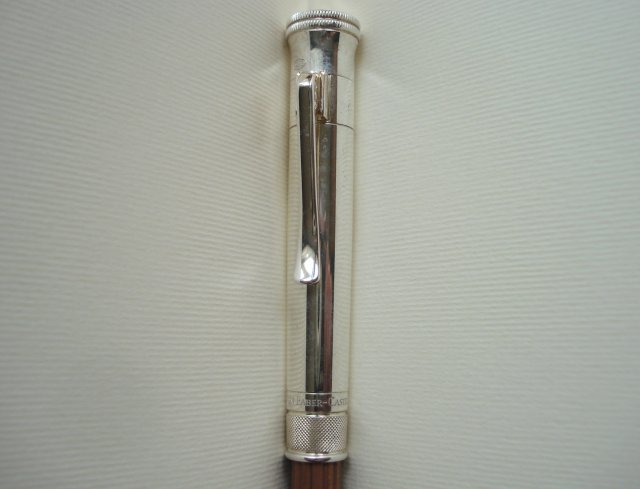 The pencil and extender come in a cloth pouch inside a wood box. 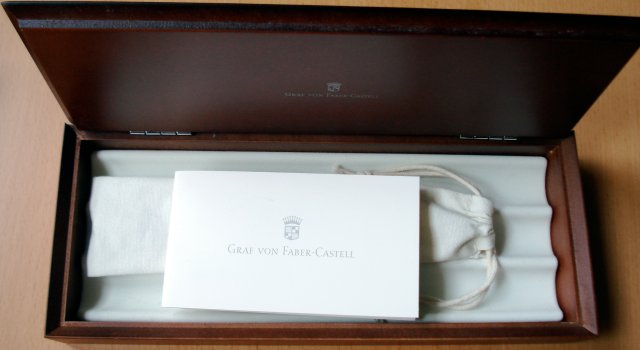 Apart from the material, the “double crown” of the cap is possibly the feature most different from other versions. 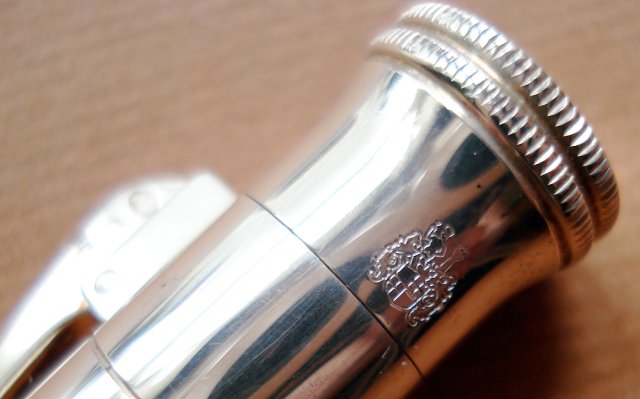 The excellent spring clip has some hallmarks: 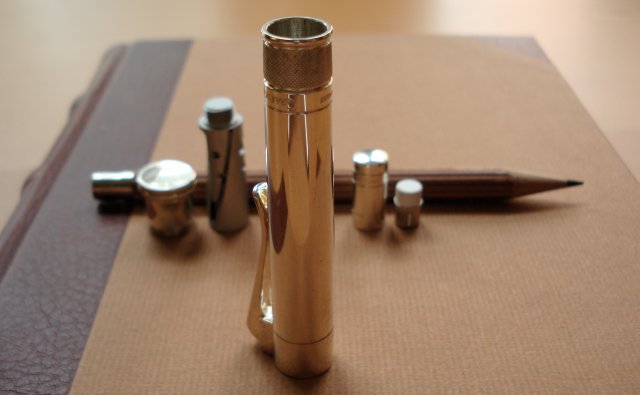 And a closer view. Note that the eraser cap is also sterling.

It seems to call for a nice journal. 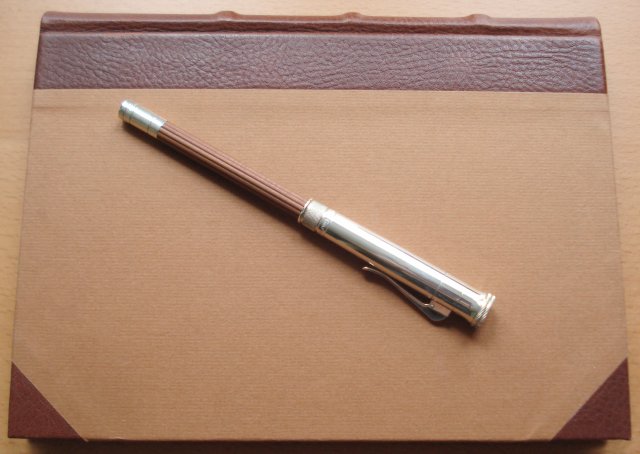 And a family portrait. One of them definitely seems to not belong! 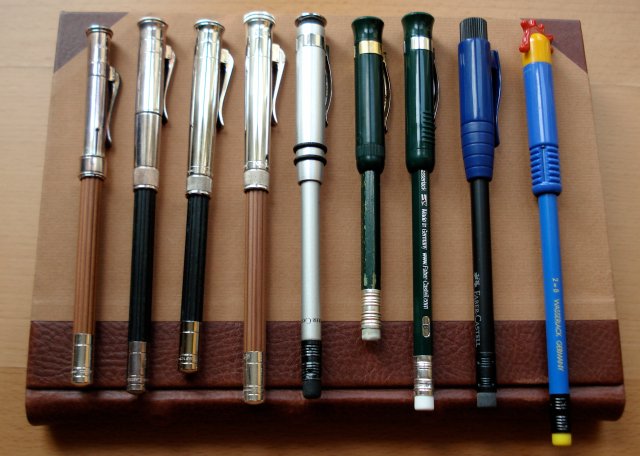 Regular readers will have heard some of this before – I love the way Faber-Castell has paid tribute to the woodcase pencil in this series. Creating a fantastic pencil and a companion for it that allowed entry into the top writing implement shops in the world’s major cities is a wonderful act that has helped preserve the pencil.

2011 will be Faber-Castell’s 250th anniversary. Perhaps they will unveil a new perfect pencil or even something completely new? 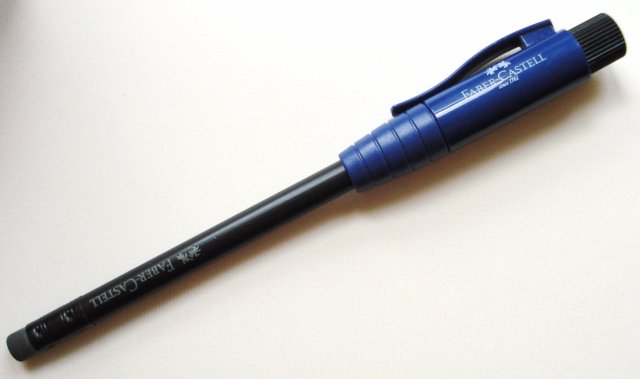 A regular gripe regarding Faber-Castell’s perfect pencils, even the basic plastic version, has been regarding the price. I don’t disagree, yet also note that there don’t appear to be many alternatives. KUM has tried to offer an extender, and there are some artisan made extender caps in Japan, but Faber-Castell’s products are the only items in this category that which appear to have wide distribution.

I wonder if there was a marketing meeting full of animated debate which led to this – it seems to be Faber-Castell’s knockoff of their own product. It is “Made in China” rather than “Made in Germany”, and the styling reflects other new products rather than tradition.

The finish is acceptable. The sharpener in the cap seems to work well – addressing a regular complaint. The price is also a fraction of predecessor products.

While the item has a disposable feeling, it might also sell in volume and generate some revenue. 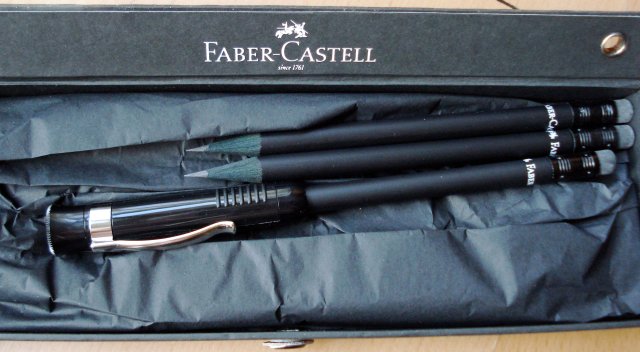 It looks like the original green plastic version has been updated.

The newer version has some minor cosmetic differences and a major functional difference – the pencil is now held in the extender by friction or tension, rather than a screw on mechanism.

It is also offered in Japan in a black version, shown in the photos here. The black version comes with a round pencil, black with black dyed wood. 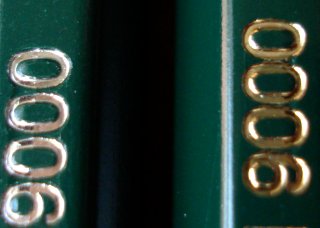 Some side ribbing seems to be the main surface difference.

It is hard to say this authoritatively, but I sense prices have been reduced in most markets compared with the original. 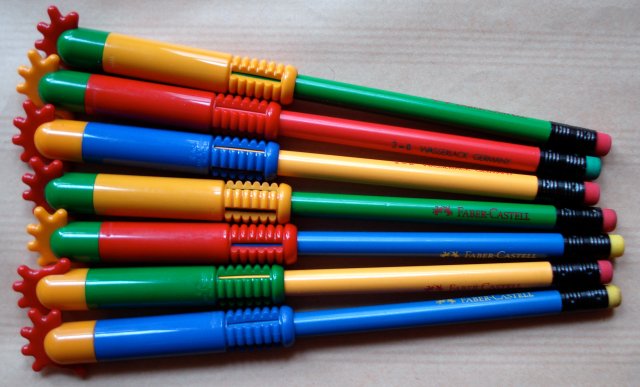 Almost two years ago, I thought I had written my last word on Faber-Castell’s fantastic Perfect Pencil series. Well, quite unexpectedly, I recently saw an unusual variant.

I think I recall it or something similar from about a decade ago, and I definitely recall a recent post at Lung Sketching Scrolls about this edition. 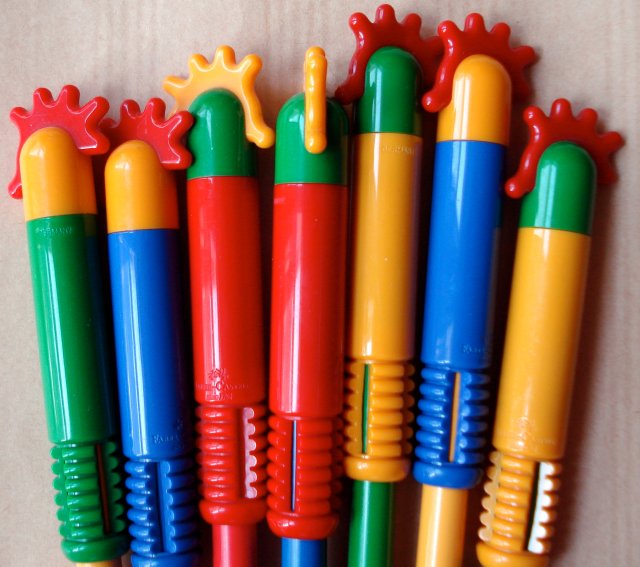 The product is a whimsical children’s version of the perfect pencil, with a brightly coloured round pencil and pencil extender adorned with a stylized rooster comb. 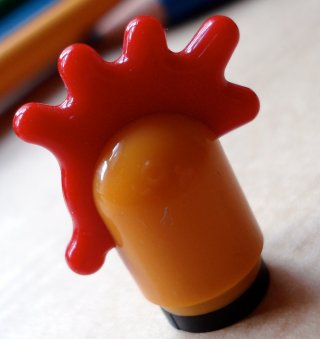 The pencil is held by tension, and the cap removes to reveal a black plastic sharpener.